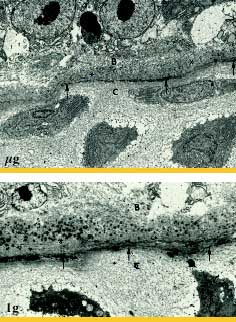 Electron micrographs of quail limb bones that formed under the influence of microgravity show decreased mineralization compared to bones formed in normal gravity. The letters "B" and "C" indicate bone and cartilage sides of the sample, respectively, with the arrows marking the junction between bone and cartilage cells. The asterisks indicate where mineralization begins. The bone that developed during spaceflight (top) shows less mineral compared to the control sample (bottom); the control sample clearly shows mineral deposits (dark spots) that are absent in the flight sample. Credit: NASA.

Bone demineralization is one of the greatest threats to long-duration manned space missions. Relieved of the normal stresses produced by gravity, bones start to lose calcium and other minerals faster than they can replace them. On short missions, such as those of the Space Shuttle, this is not a problem. However, some of the bones of astronauts and cosmonauts who have spent months aboard space stations have been found to have lost up to one-fifth of their mineral content – significantly increasing the risk of fractures. Not all bones lose minerals at the same rate in space. For example, the bones in the upper body appear not to be affected at all, whereas the weight-bearing bones in the legs and lower back experience a disproportionately high loss.

When bones lose minerals – as they do all the time, even under normal conditions – those minerals are carried by the blood to the kidneys, where they are filtered out for excretion in the urine. However, prolonged heightened levels of calcium in the body, a condition known as hypercalciuria, can lead to the formation of kidney stones which are potentially disabling. This is one of the reasons that astronauts' diets cannot simply be calcium-enriched. The methods used to remove kidney stones on Earth are simply not available aboard a space station. Furthermore, drugs which have some effect on bone calcium loss have side-effects, and they act on all the bones in the body, not just those that need the extra calcium. The effect of systemic drugs is a buildup in unwanted calcium in some bones, while preventing mineral loss in others.

Exercise has been suggested and used as a countermeasure to bone demineralization (and also muscle degeneration), but the forces needed to prevent deterioration of the weight-bearing bones seem to be roughly equal to the body weight of the individual (not surprisingly, since most people gain and lose bone minerals at the same rate doing normal activities on Earth). However, it is difficult to design exercise equipment that can produce this level of force in a way convenient for the astronaut to use. Various methods have been proposed and tried, including bungees, springs, bicycles, and treadmills, but attaching the load-bearing portion of the exercise equipment to the body in an acceptable way has been a stumbling block. Straps tend to cut into the shoulders and hips, and the human shoulder is not designed to carry one body weight loads for long durations or intensive exercise.

Researchers at NASA and elsewhere are developing ground-based protocols for understanding the mechanism of bone-loss and changes in calcium metabolism that occur during spaceflight. These ground-based research protocols include human and animal studies. The human studies may involve prolonged bed rest as a microgravity analog, and the animals studies may involve limb immobilization and other techniques. Meanwhile, scientists at the National Space Biomedical Research Institute are developing a compact machine to allow precision bone and tissue measurements in space. Known as the advanced multiple projection dual-energy X-ray absorptiometer, or AMPDXA, it will give astronauts aboard the International Space Station a readout of their tissue mass, bone density and bone geometry, enabling them to spot any adverse effects and take steps to counter them before they become serious.