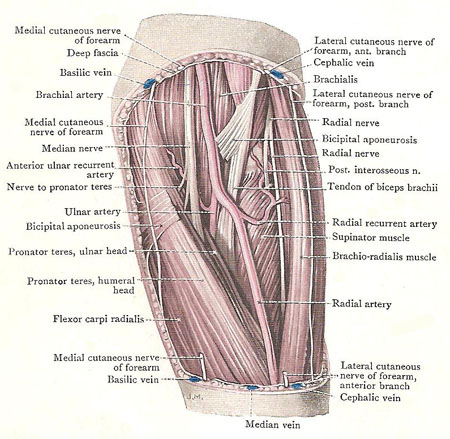 Dissection of the left cubital fossa.

The cubital fossa is the hollow in front of the elbow. It corresponds to the popliteal fossa at the back of the knee.

The cubital fossa is triangular in outline, with the base above. The roof is the deep fascia strengthened by the bicipital aponeurosis; it is pierced by a communication between the deep veins and the median cubital vein. It is covered by the skin and by superficial fascia containing a portion of the cephalic vein, a portion of the basilic vain, the median cubital vein, the anterior branch of the medial cutaneous nerve of the forearm, and the lateral cutaneous nerve of the forearm.

The base is an imaginary line drawn between the two epicondyles. The median border is the pronator teres muscle. The lateral border is the brachio-radialis. Those two muscles meet at the apex, where the brachio-radialis overlaps the pronator teres. The floor is formed by the distal part of the supinator muscle, which is wrapped round the proximal third of the shaft of the radius.

The contents of the fossa are: a quantity of fat; the termination of the brachial artery; the proximal parts of the radial artery and ulnar artery.

The ulnar artery leaves the space by passing under cover of the pronator teres; the radial artery descends through the apex of the fossa, overlapped by the bracho-radialis. The median nerve, having given off branches from its medial side, disappears between the two heads of the pronator teres. The tendon of the biceps brachii inclines backwards, between the two bones of the forearm, to reach its insertion.