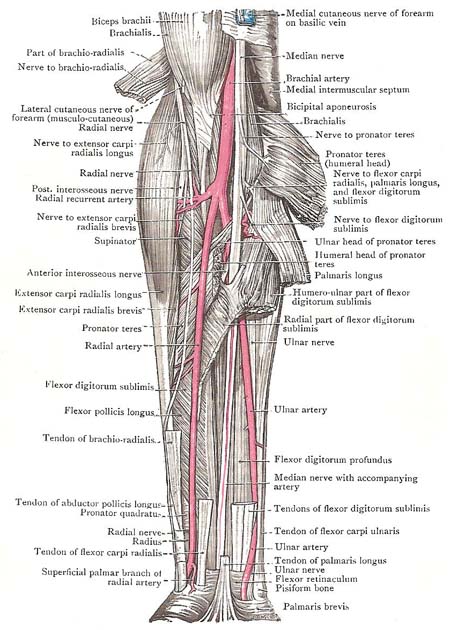 Deep dissection of the muscles, vessels (including radial artery), and nerves of the front of the forearm.

The radial artery is the smaller of the two terminal branches of the brachial artery, though its direction gives it the appearance of being the continuation of the parent trunk in the forearm. The radial artery originates in the cubital fossa opposite the neck of the radius, and descends in the lateral part of the front of the limb until it reaches the distal end of the radius. There, it turns round the lateral border of the wrist.


Relations in the forearm

Throughout its whole length the radial artery is closely accompanied by venae comitantes. At first, its lies between the pronator teres and the brachio-radialis, and is overlapped to a variable extent on the lateral side by the fleshy belly of the brachio-radialis. Lower down, the brachio-radialis is on its lateral side, and the flexor carpi-radialis on its medial side; and so they remain as far as the wrist. Where the muscles mentioned are fleshy, the artery lies at some depth from the surface; but when their tendons appear it assumes a superficial position, and is covered merely by the skin and fasciae. The radial nerve lies along its lateral side in the middle third of the forearm; higher up, the nerve is separated from the vessel by a slight interval; and, distally, the nerve leaves the artery and turns round the lateral margin of the forearm, under cover of the tendon of the brachio-radialis.

Posteriorly, the radial artery rests chiefly on the muscles which clothe and find attachment to the front of the radius. At its origin it rests upon the tendon of the biceps brachii; and then, in succession, it lies in front of the supinator, with some adipose tissue intervening, the pronator teres, the radial head of the flexor digitorum sublimis, the flexor pollicis longus, the pronator quadratus, and, lastly, the distal end of the radius.


Branches in the forearm

The muscular branches are numerous; they arise at irregular points, mainly in the upper part of the course of the forearm.

The radial recurrent artery originates close to the beginning of the radial artery. It runs upward to anastomose with the anterior branch of the profunda brachii artery in front of the lateral epicondyle.

The anterior carpal artery is a small branch that runs medially on the distal end of the radius.


Radial artery in the wrist

At the distal end of the radius, the radial artery leaves the front of the forearm, turns backward below the styloid process of the radius, and then descends over the scaphoid and trapezium to reach the proximal end of the first interosseous space. There, it turns forward through the space, between the two heads of the first dorsal interosseous muscle, to enter the palm.

As it turns backward below the radius, it lies on the lateral ligament of the wrist joint, and is crossed by the tendons of the abductor pollicis longus and extensor pollicis brevis. It crosses the carpus in the floor of the "anatomical snuff-box", where it can be felt pulsating. Note in your own hand that the commencement of the cephalic vein overlies it, and it may be seen through the skin. Before the artery disappears it is crossed by the extensor pollicis longus and digital branches of the radial nerve.

The branches which spring from the radial artery in this part of its course are of small size; they supply the structures on the back of the hand and digits.

Each dorsal metacarpal artery sends two perforating arteries forward through the interosseous space to connect it with the deep palmar arch and with a palmar digital artery.

The dorsal digital arteries for the thumb and radial side of the forefinger arise independently from the radial artery before it disappears into the palm.


Radial artery in the palm

The radial artery enters the palm through the proximal end of the first intermetacarpal space between the two heads of the first dorsal interosseous muscle. In the palm, it lies at first between that muscle and the adductor pollicis, where it gives off the radialis indicis and princeps pollicis arteries; and then it passes through the adductor to become the deep palmar arch.

The radialis indicis artery descends between the transverse head of the adductor pollicis and the first dorsal interosseous muscle to the lateral border of the index, along which it proceeds as its lateral palmar digital artery.