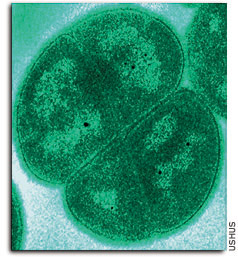 Deinococcus radiodurans is the most radiation-resistant organism known. It is a bacterium and extremophile, and was discovered decades ago in canned food that was sterilized using radiation. Red patches appeared in the cans – colonies of the bacterium – setting off questions as to how it could have survived.

Deinococcus radiodurans, nicknamed Conan the Bacterium, can withstand 1.5 million rads – a thousand times more than any other life form on Earth and 3,000 times more than a human can survive. Its extraordinary tolerance makes it useful at nuclear waste sites, where it consumes nuclear waste and transforms it into more disposable derivatives. The ability to withstand other extreme stresses, such as dehydration and low temperatures, makes the microbe one of the few life forms found at the North Pole. Its survival skills have been the source of much curiosity worldwide, even including speculation that it may have originated on Mars, where radiation levels are higher.

Since DNA is the first part of a cell to be damaged by radiation and the most lethal damage is the breakage of both DNA strands, scientists have focused on DNA repair mechanisms to find the answer to the microbe's resilience. Cells, including human cells, can mend only very few such breaks in their DNA. Microbes, for example, can repair only three to five. Yet D. radiodurans can fix more than 200. Thus scientists believed that the microbe must possess uniquely effective enzymes that repair DNA. However, a series of experiments showed that the microbe's repair enzymes were very similar to those in ordinary bacteria.


DNA in a ring

One clue to D. radiodurans' resilience was uncovered in 2002 by Avi Minsky and colleagues at the Weizmann Institute of Science's Organic Chemistry Department. Using various optical and electron microscopy methods, they found that the microbe's DNA is organized in a unique ring that prevents pieces of DNA broken by radiation from floating away into the cell's liquids. Unlike other organisms, in which DNA fragments are lost due to radiation, this microbe does not lose genetic information because it keeps the severed DNA fragments tightly locked in the ring – by the hundreds, if necessary. The fragments, held close, eventually come back together in the correct, original order, reconstructing the DNA strands. The results may lead to a better understanding of DNA protection in sperm cells, where a ring-like DNA structure has also been observed. Minsky's team also found that the microbe undergoes two phases of DNA repair. During the first phase the DNA fixes itself within the ring as described. It then performs an even more unusual stunt. The bacterium is composed of four compartments (see photo), each containing one copy of DNA. Minsky's group found two small passages between the compartments. After about an hour and a half of repair within the ring, the DNA unfolds and migrates to an adjacent compartment – where it mingles with the copy of DNA residing there. Then the regular repair machinery, common in humans and bacteria alike, comes into play – repair enzymes compare between the two copies of DNA, using each as a template to fix the other. Since the DNA has already been through one phase of repair in which many of the breaks are fixed, this phase can be completed relatively easily.

The finding of a tightly-packed ring made the team wonder how the bacterium could live and function under normal conditions. DNA strands must unfurl to perform their job of protein production. How can they do that if they can barely budge? This question led to the uncovering of another of the microbe's survival strategies: out of the four copies of DNA, there are always two or three tightly packed in a ring while the other copies are free to move about. Thus at any given moment there are copies of DNA that drive the production of proteins and others that are inactive but continuously protected. Minsky, along with other scientists, believes that the bacterium's answer to acute stresses evolved on Earth as a response to the harsh environments from which it might have emerged. It is one of the few life forms found in extremely dry areas. The unique defense mechanism that evolved to help it combat dehydration proves useful in protecting it from radiation.

A further secret to the extraordinary survival skills of D. radiodurans was revealed in 2007 by Michael Daly of the Uniformed Services University of the Health Sciences in Bethesda, Maryland, and colleagues. Their research highlighted the key role of repair proteins in the ability of cells to survive radiation. By exposing Deinococcus and other resistant bacteria to radiation, Daly's team found that the resilience of a cell's repair proteins is linked to the number of manganese (II) ions inside the cell. Manganese prevents oxidative damage to repair proteins and allows them to swing into action after radiation has damaged DNA.

In effect, this means that it doesn't matter how much an organism's DNA is broken up, as long as retains the means to stitch the DNA back together with repair proteins. The implication is that if the repair systems are kept intact, then survival is possible even at high doses of radiation.

Daly has speculated that it may be possible to deliver D. radiodurans repair proteins into animal cells and so increase radiation resistance. This could be useful in space travel, where radiation sickness is a potential problem on long journeys.