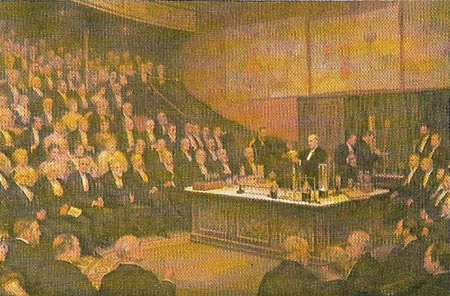 James Dewar could not have given this demonstration of pouring liquid hydrogen without the 19th century's work on thermodynamics. The law of the conservation of energy and the identifying of heat as energy were vital advantages. The idea that the heat of an object depends on the movement of its molecules led to the concept of absolute zero and is basic to the 20th-centruy idea of matter.

James Dewar was a Scottish chemist and physicist who invented the first vacuum flask (1892), now named after him, pioneered techniques in low-temperature physics, and contributed to the discovery of cordite. He also proposed various structures (including the "Dewar structures") for benzene. Dewar was born at Kincardine and trained both in Britain and continental Europe before becoming a professor at Cambridge. At the same time, he carried out most of his experimental work at the Royal Institution in London.

Dewar became interested in turning gases into liquids at low temperatures. In 1898, for example, he succeeded in liquefying hydrogen by cooling and compressing it. In the course of his experiments he found the need for a device to keep liquid air cool and prevent it from boiling away. Since liquid air begins to turn back into gas at about minus 200°C, there was a considerable problem in storing it.

The flask that Dewar devised for the purpose was quite a simple affair. It was merely a double-walled glass vessel. All the air was drawn out of the space between the two walls by a pump, so that any liquid in the flask was surrounded, to all intents and purposes, by a vacuum. The most important ways in which the liquid would normally gain heat – by thermal conduction through the surrounding air – was therefore eliminated. Heat in the form of waves – thermal radiation – is not stopped by a vacuum. Later flasks had their walls silvered to cut down the amount of thermal radiation (see Dewar flask.

Dewar discovered the magnetic properties of liquid oxygen and ozone, and also contributed, together with Frederick Abel (1827–1902), to the development of cordite, a smokeless propellant explosive. He received among other honors, the Rumford Medal of the Royal Society.