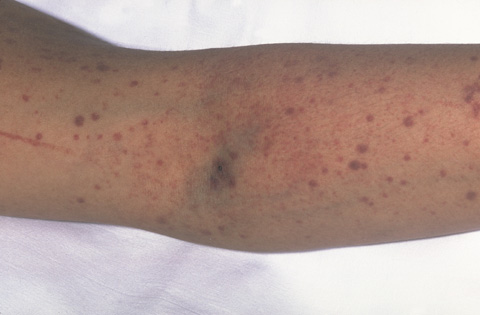 The photograph shows purpura (bruises) and petechiae (dots) in the skin. Bleeding under the skin causes the purple, brown, and red colors of the purpura and petechiae.

In DIC, the increased clotting uses up platelets and clotting factors in the blood. Platelets are blood cell fragments that stick together to seal small cuts and breaks on blood vessel walls and stop bleeding. Clotting factors are proteins needed for normal blood clotting.

The bleeding that DIC causes may be life threatening.

To understand DIC, it helps to understand the body's normal blood clotting process. The body has a system to control bleeding. When small cuts or breaks on blood vessel walls occur, clotting factors in the body are activated. These clotting factors, such as thrombin and fibrin, work with platelets to form blood clots.

The blood clots seal the small cuts or breaks on the blood vessel walls. After the bleeding has stopped and healing has occurred, your body breaks down and removes the clots.

Examples of less common causes of DIC are bites from poisonous snakes (such as rattlesnakes and other vipers), frostbite, and burns.

There are two types of DIC: acute and chronic. Acute DIC develops quickly (over hours or days) and must be treated right away. It begins with excessive blood clotting in the small blood vessels and quickly advances to serious bleeding.

Chronic DIC develops slowly (over weeks or months). It lasts longer and usually isn't recognized as quickly as acute DIC. Chronic DIC causes excessive blood clotting but doesn't usually lead to bleeding. Cancer is the most common cause of chronic DIC.

Treatment for DIC involves treating the clotting and bleeding problems and the underlying cause of the condition.

Researchers are looking for ways to prevent DIC or recognize it early. They're also studying the use of various clotting proteins and medicines to treat the condition.

Some diseases and conditions can disrupt your body's normal blood clotting process and lead to disseminated intravascular coagulation (DIC). These diseases and conditions include sepsis, surgery and trauma, cancer, and serious complications of pregnancy and childbirth. Examples of less common causes of DIC are bites from poisonous snakes (such as rattlesnakes and other vipers), frostbite, and burns.

There are two types of DIC: acute and chronic. Acute DIC begins with clotting in the small blood vessels and quickly advances to serious bleeding. Chronic DIC causes blood clotting but usually doesn't lead to bleeding. Cancer is the most common cause of chronic DIC.

Two other conditions cause blood clotting in the small blood vessels; however, their causes and treatments are different from the causes of and treatments for DIC. These conditions are thrombotic thrombocytopenic purpura, or TTP, and hemolytic-uremic syndrome (HUS). HUS is more common in children than adults and more likely to cause kidney damage than TTP.

Signs and symptoms of disseminated intravascular coagulation (DIC) depend on its underlying cause and whether the DIC is acute or chronic.

Acute DIC develops quickly (over hours or days) and is very serious. Chronic DIC develops more slowly (over weeks or months). It lasts longer and usually isn't recognized as quickly as acute DIC.

With acute DIC, blood clotting in the blood vessels usually occurs first and then bleeding. However, bleeding may be the first obvious sign. Serious bleeding can occur very quickly after developing acute DIC. Thus, emergency treatment in a hospital is needed.

With chronic DIC, blood clots are more likely to occur than bleeding. Sometimes, chronic DIC has no signs or symptoms.


Signs and symptoms of bleeding

In DIC, the increased clotting activity uses up the platelets and clotting factors in the blood. As a result, serious bleeding can occur. DIC can cause internal bleeding and external bleeding.

External bleeding may cause purpura or petechiae. Purpura are purple, brown, and red bruises. This bruising may happen easily and often. Petechiae are small red or purple dots on your skin.


Other signs of external bleeding include:

A doctor will diagnose disseminated intravascular coagulation based on the patient's medical history, a physical exam, and the results from tests. The doctor also will look for the underlying cause of DIC.

Acute DIC requires emergency treatment and can be life threatening if it's not treated right away.

To diagnose DIC, one or more of the following blood tests may be used to look at your blood cells and the clotting process. For these tests, a small amount of blood is drawn from a blood vessel, usually in your arm.

A complete blood count (CBC) measures the number of red blood cells, white blood cells, and platelets in the blood. Platelets stick together to seal cuts or breaks on blood vessel walls and stop bleeding. Abnormal platelet numbers may be a sign of a bleeding disorder (not enough clotting) or a thrombotic disorder (too much clotting).

A blood smear is a test that may reveal whether a person's red blood cells are damaged.

The following tests examine the proteins active in the blood clotting process and how long it takes them to form a blood clot.

Treatment for disseminated intravascular coagulation depends on its severity and underlying cause. The main goals of treating DIC are to control bleeding and clotting problems and treat the underlying cause.

People who have acute DIC may have severe bleeding that requires emergency treatment in a hospital. Treatments may include blood transfusions, medicines, and oxygen therapy. (Oxygen is given through nasal prongs, a mask, or a breathing tube inserted through the mouth or nose and into the windpipe.)

A blood transfusion is a safe, common procedure. You receive blood through an intravenous (IV) line in one of the blood vessels. Blood transfusions are done to replace blood loss due to an injury, surgery, or illness.

Blood is made up of various parts, including red blood cells, white blood cells, platelets, and plasma. Blood is transfused either as whole blood (with all its parts) or, more often, as individual parts.

If you have DIC, you may be given platelets and clotting factors, red blood cells, and plasma (the liquid part of blood).

People who have chronic DIC are more likely to have blood clotting problems than bleeding. Treatment may involve medicines called anticoagulants. These medicines, which also are called blood thinners, help prevent blood clots from forming. They also keep existing blood clots from getting larger.


Living with for disseminated intravascular coagulation

If a person has been diagnosed with disseminated intravascular coagulation, he or she should talk with their doctor about how often to schedule follow-up care and blood tests. Blood tests help track how well the blood is clotting.

The patient may need to take anticoagulants, or blood thinners, to help prevent blood clots or to keep existing clots from getting larger. A person taking blood thinners should let everyone on his or her health care team know. Blood thinners may thin the blood too much and cause bleeding. A lot of bleeding after a fall or injury or easy bruising or bleeding may mean that the blood is too thin.

A doctor should be called right away if there is any sign of bleeding.

Also, a doctor should be consulted before using any over-the-counter medicines or products, such as vitamins, supplements, or herbal remedies. Some of these products also can affect blood clotting and bleeding. For example, aspirin and ibuprofen may thin the blood too much. This can increase the risk of bleeding.

If surgery is needed, the doctor may adjust the amount of medicine taken before, during, and after the surgery to prevent bleeding. This also may happen for dental work, but it's less common.