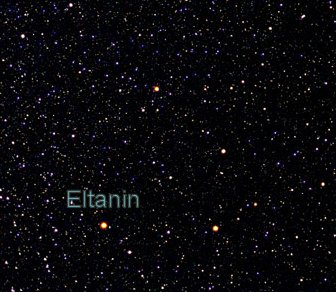 Eltanin (Gamma Draconis) is the brightest star in the constellation Draco. Its name comes from the Arabic for "the serpent" and stands for the whole constellation. Eltanin's high northerly position takes it nearly through the zenith as seen from London, causing it to be known formerly as the zenith star and to be heavily studied. While attempting to measure its parallax – the annual shift in stellar position caused by the changing position of the orbiting Earth (from which we get stellar distance) – James Bradley, in 1728, discovered the aberration of starlight, which is caused by the velocity of the moving Earth relative to the speed of the light coming from the star. This discovery proved, once and for all, that Copernicus was right and that Earth truly does move around the Sun.

Eltanin is moving toward us, and will make a closest pass of 28 light-years about 1.5 million years from now, when it will be the brightest star in the sky and will rival our current Sirius. Physically, Eltanin is an orange giant K star, a bit over half the size of Mercury's orbit.