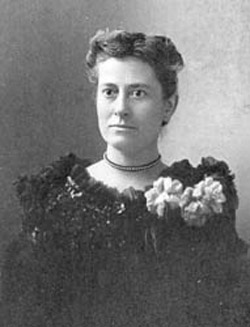 Williamina Fleming was a Scottish astronomer who, in the United States, discovered dozens of nebulae, including the famous Horsehead Nebula, and did important work on stellar classification (see spectral type).

Fleming was born in Dundee, married there, and taught for a short while before emigrating to Boston, Massachusetts, when she was 21. Subsequently, her husband abandoned her and her child and she became a maid in the home of the distinguished astronomer Edward Pickering. She was then offered part-time work at Harvard College Observatory, of which Pickering was director, as a (human!) computer. Though positions in computing were poorly paid, they were the only way at the time that women could get into astronomical work – university courses and paid work as assistants at major observatories being largely a male preserve. Fleming's talent was such, however, that in 1881 she was made a permanent member of the staff.

She developed an empirical star classification scheme consisting of 17 categories (a huge advance upon Angelo Secchi's seminal scheme) and went on to classify 10,351 stars based on their photographed spectra. Her work, published as a catalogue in 1890, was further refined by Annie Jump Cannon. While engaged in her monumental task, Fleming discovered 10 novae, about 60 new nebulae, and more than 300 variable stars.