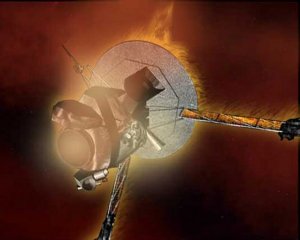 Speed records for spacecraft have to be carefully defined. If we say, for example, that a spacecraft is traveling at 20,000 mph, what is this relative to – the Earth, the Sun, or some other body?

New Horizons is unlikely, however, to claim a second record, as the fastest interstellar spacecraft ever launched from Earth. After its encounter with Pluto and possibly one or more objects in the Kuiper Belt, New Horizons will leave the Solar System, to join four other spacecraft – Voyager 1 and Voyager 2, and Pioneer 10 and Pioneer 11 – that are also on exit trajectories from the Sun's realm. Currently, of this group, Voyager 1 is traveling the fastest away from the Sun with a speed of 38,600 mph (62,100 km/h). New Horizons will approach Pluto with a speed of about 31,300 mph (50,370 km/h) and it is unlikely that this will be boosted beyond the speed of Voyager 1 by the relatively weak gravitational effect of Pluto or other small bodies in the Kuiper Belt.

The record for the fastest spacecraft of all is held by the twin Helios probes that were placed in orbit around the Sun. Both these vehicles reached top speeds of around 150,000 mph (250,000 km/h) at closest approach to the Sun in their highly elliptical orbits, Helios 2 being marginally the swifter.

The highest speed at which a spacecraft has entered Earth's atmosphere is 29,000 mph (46,660 km/h) in the case of Stardust, comfortably surpassing the 24,790 mph (39,885 km/h) reentry speed of the Apollo 10 Command Module and its three-astronaut crew. The highest speed for any atmospheric entry was achieved by the Galileo spacecraft when it plunged to its intentional destruction in the atmosphere of Jupiter at 108,000 mph (173,770 km/h), narrowly beating the previous record of 106,000 mph (170,000 km/h) achieved by its own atmospheric probe, eight years earlier.