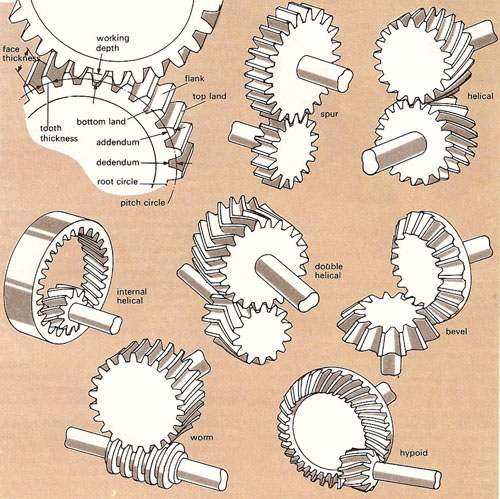 A gear is part of a machine – a toothed wheel – used to transmit rotation from one shaft to another without slip. Gears are used in pairs, or in threes if both shafts are to rotate in the same sense. The smaller member of a pair of gears is called a pinion. If the pinion is on the driving shaft, speed is reduced and turning force increased. If the larger gear is on the driving shaft speed is increased and turning force reduced.

Gear teeth are designed to mesh and turn with minimal friction: thus their sides are shaped as involutes of the circular wheel, so that they can roll on each other.

The commonest type of gear for parallel shafts is the spur gear, with straight teeth parallel to the axis; the helical gear has teeth cut along sections of a helix, the double helical gear – the most efficient type – having a herring-bone-like arrangement to avoid axial thrust. Bevel gears, whose tapering teeth are set on a frustum of a cone, connect intersecting shafts. Skew shafts are connected by a gear and worm: the worm is a screw, equivalent to a one-toothed gear, so the gear ratio is high.