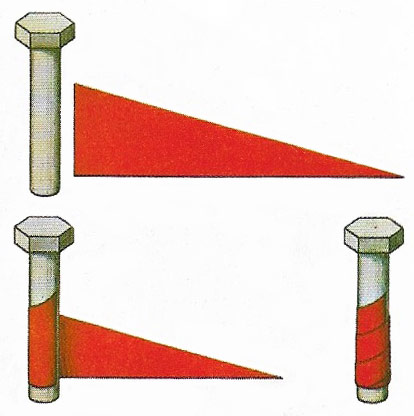 Fig 1. A screw can be pictured as an inclined plane wrapped around a cylinder. The mechanical advantage of an inclined plane - it is easier to push a load up a ramp than to lift it vertically - can be realized by rotating the screw, often to exert considerable force. The distance between the threads is called the pitch of the screw and is the distance the screw advances every time it makes one revolution. 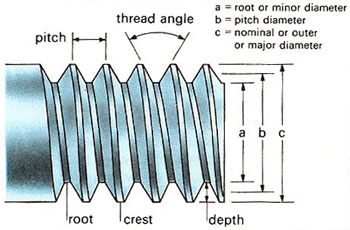 Fig 2. Diagram of a screw thread with its main components labelled. 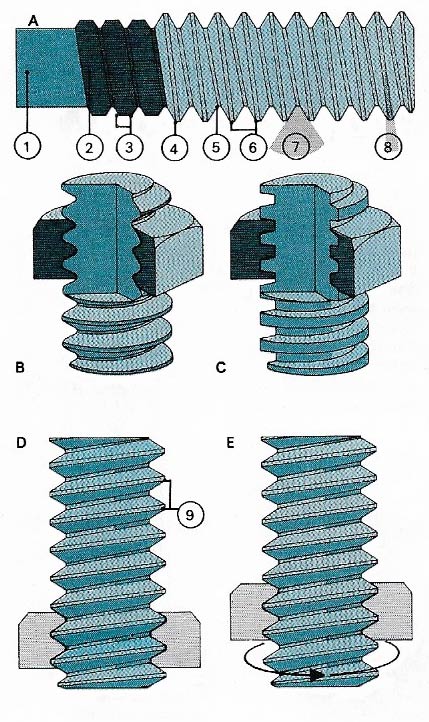 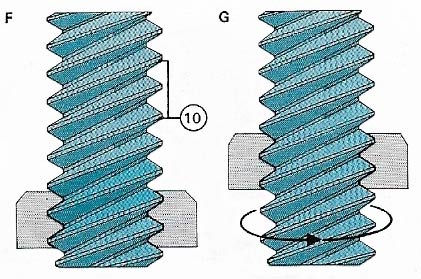 Fig 3. Screw threads on bolts generally conform to a few major types and there is a set of specialized terms to describe them. Engineers use this thread terminology to define kinds and parts of screws (A), including the two major diameters, the root diameter (1) and the pitch diameter (2), the thickness of the thread (3), the crest (4) and root (5). The pitch (6) is the spacing between threads, but the properties of the screw depend also in the thread angle (7) and the helix angle (8). The two main kinds of screw are round-sectioned (B) and square-sectioned (C). In a single-start thread (D) the lead (9) and the pitch are the same. After one revolution (E) a nut moves along a distance equal to the pitch. In a double-start thread (F) the lead (10) is twice the pitch, and a nut moves through twice the pitch (G).

The screw one of the traditional types of simple machine. Like levers, pulleys, and inclined planes, screws are used for raising large loads by the application of quite small efforts. As with all these machines, the distance the large load is raised is small compared with the distance through which the effort moves.

A screw thread can be pictured as an inclined plane wrapped round a cylinder (Fig 1). This shape is called a helix and its geometry was studied in about 200 BC by the Greek mathematician Apollonius of Perga. Archimedes invented screw-cutting machinery and used the screw as the key principle in his famous pump for raising water – the Archimedean screw.

Just as a wedge can be driven into an object by hammering, the helical wedge of a screw can be driven in by turning. The turning movement requires leverage – a screwdriver or spanner – and the simple-looking screw is in use, a "machine" that combines the lever and the wedge.

The distance between the screw's threads is called the pitch (Fig 2 and 3) and is a measure of the slope of the corresponding inclined plane. In one complete turn a screw moves through a distance equal to its pitch. The length of the lever turning the screw, divided by the pitch, gives its mechanical advantage. The wedge-shaped section of a tapering wood screw reveals another application of the wedge as it forces its way into the timber. Self-tapping screws cut a helical thread as they wind their way into metal.

A simple screw jack comprises a rod in which a square screw thread has been cut, a base plate in which this can rotate, and a block (or nut) through which the screw thread runs. The block is shaped so that it hooks on the underside of the car. When the screw is rotated by means of the rod that passes through a hole in the screw, the block is slowly raised or lowered.

A screw thread is spiral cut made in the rod so that the screw may be regarded as a spiral inclined plane. For each complete turn of the screw it advances the same distance. This distance is the pitch of the screw, which can also be found by measuring along the length of the screw the distance between two adjacent ridges of the thread. The screw of a screw jack with a diameter of 3/4 in. may have six threads to the inch, so the pitch of of the thread is 1/6 in. Thus for every one complete revolution of the rod the lifting block moves 1/6 in. up or down.

The velocity ratio of any machine is found by dividing the distance (e) through which the effort moves by the distance (l) through which the load is raised. If the rod is a little over 6 in in length it will trace out a circle of radius 6 in for each complete revolution. The circumference of this circle is about 37.7 in, so that the load is raised 1/6 in for every 37.7 in that the effort moves. The velocity ratio of the screw jack = e/l = 37.7/(1/6) = 226.

Even if the thread of the screw is kept clean and is well greased, there is still likely to be considerable friction between the screw and both the lifting block and the base plate. Thus a load of 2000 N could be lifted by a 8.8 N effort if there were no friction. But in practice the effort would be three to four times greater than this.

On account of the large frictional forces between the screw and the block, the load cannot "unscrew" itself and run back under its own weight. This means that devices incorporating screws can be used not only for squeezing things in clamps but also to keep them in a state of compression. Screw presses and clamps are used for this purpose, for example, by carpenters when they are gluing joints. Likewise, objects can be held firmly in place in a bench vise by the clamping action of the screw thread it incorporates.

The screw propeller is a device that converts the torque of a rotating shaft into propulsion or thrust. It is based on the principle of a helical screw, which advances in wood when it is rotated; the propeller advances in air or water when it is rotated by an engine. Simple propellers have a fixed pitch so that the amount of thrust increases as the speed of rotation increases; variable-pitch propellers are rotated at constant speed, and thrust is varied by adjusting the angle at which the blades meet the air or water.