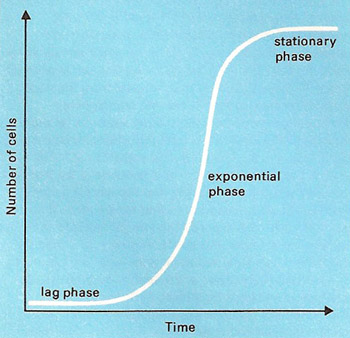 The S-shaped growth curve typical of the growth of the number of cells in a bacterial culture.

Growth is the increase in the size of an organism, reflecting either an increase in the number of cells or one in its cytoplasmic material, or both. Cell number and cytoplasmic content do not always increase together; cell division can occur without any increase in cytoplasm giving a large number of smaller cells. Alternatively, cytoplasm can be synthesized with no cell division so that the cells become larger. Any increase in cytoplasm requires the synthesis of cell components such as nuclei, mitochondria, thousands of enzymes, and cell membrane. These require the synthesis of macromolecules such as proteins, nucleic acids, and polysaccharides from amino acids, sugars, and fatty acids. These subunits must be synthesized from still simpler substances obtained from the environment.

Growth curves, which plot time against growth (such as the number of cells in a bacterial culture, the number of human beings on Earth, the size and weight of a plant seedling, an animal, or an organ of an animal) all have a characteristic S-shape. This curve is divided into three parts: the lag phase, during which cells prepare for growth; the exponential phase, when actual growth occurs, and the stationary phase ceases. The time any particular cell or group of cell remains in any phase depends on their type and the particular condition prevailing. The lag phase represents a period of rapid growth of cytoplasm so that the cells become larger without any increase in their number. The duration of the lag phase depends on the resynthesis of the enzyme systems required for growth and the availability of the necessary raw materials. Basically each original cell must obtain sufficient components to form two new cells. During the exponential phase, each cell gives rise to two cells, the two to four and so on, so that the number of cells after n generations is 2n. The generation doubling time for any particular cell is constant throughout the exponential phase. The time for organisms to double their mass ranges from 20 min for some bacteria to 180 days for a human being at birth. If exponential growth were unlimited, one bacterial cell in 24 hours would give rise to 4,000 tonnes of bacteria. However, the exponential growth usually ceases (giving the stationary phase) either because of lack of an essential nutrient or because waste products produced by the cells pollute the environment. Again, in higher animals population growth is often slowed by parasite-carried epidemics.

The S-type growth pattern can be readily seen in unicellular organisms. Although growth in organisms containing different types of cells obeys the same basic rules, the relationships of the different types of cells complicate the pattern. But although all parts of a multicellular organism do not grow at the same rate or stop growing at the same rate, the overall growth curve is still S-shaped.