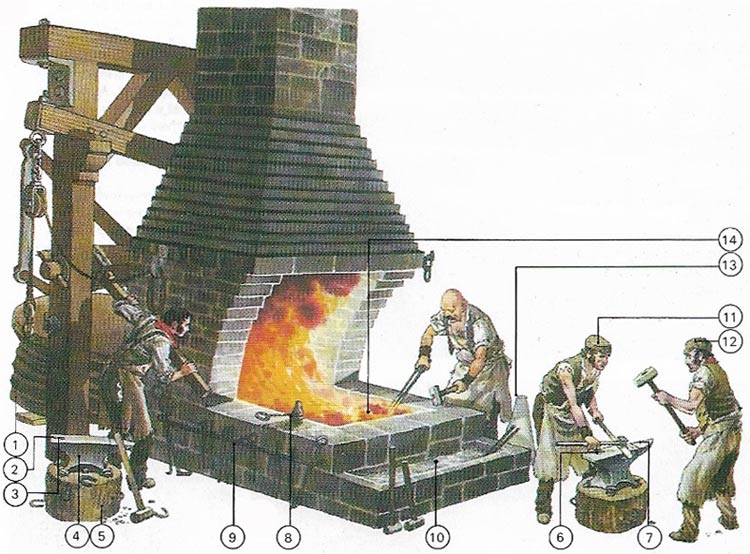 Fig 1. The smithy is centred around the open-hearth forge, where the temperature is kept high with bellows (1). Anvils are pierced with a tool hole (hardie hole) (2) and punch hole (3); the heavy body (4) resting on an elm block (5). The anvil face (6) terminates in the beak (7). A rake (8) lies near a tool rail (9); a water trough (10) is used for quenching hot work. The smith (11) carefully positions work for the striker (12). A floor mandrel (13) holds additional tools near the hearth (14). Blacksmiths not only shod horses but made every kind of locally needed metal artefact for agriculture, engineering, and even for the home. 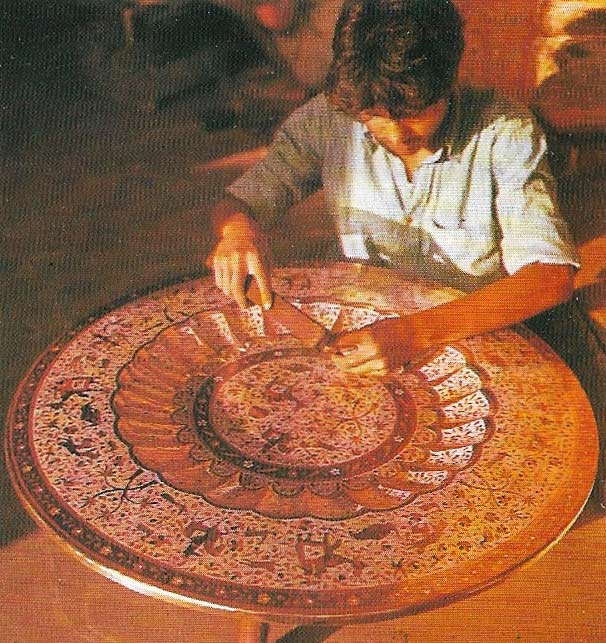 Fig 2. In India, delicate metalworking for decorative purposes reached a standard 1,000 years ago that has never been surpassed. Methods were devised for chasing and engraving soft metals, filling in the cavities with enamel, and even for inlaying one metal into a base of another metal of contrasting color. Two of the best metals for decorative work are gold and brass, because they are highly malleable and can be deformed cold without splitting. This brass engraver in Jaipur (Rajasthan) is making a tray that will probably be sold in the West for hanging on a wall. In many countries such labour-intensive work would be economically impossible. 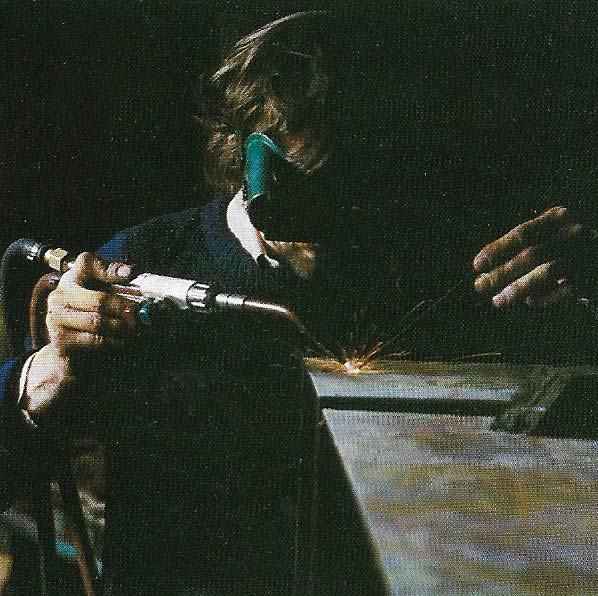 Fig 3. Modern sculptors use oxy-acetylene welding gear to cut, join and shape metals. If it is made hot enough, the molten metal flows and the artist can control the effect to create new textures unobtainable in any other way. Such techniques also allow a sculptor to employ a wide range of materials. At one time, most metal sculptures were made by casting, using metals such as bronze. Today a sculptor can work with high-melting-point metals such as stainless steel. Like all welders he must wear dark goggles to protect his eyes from the glare and flying sparks. 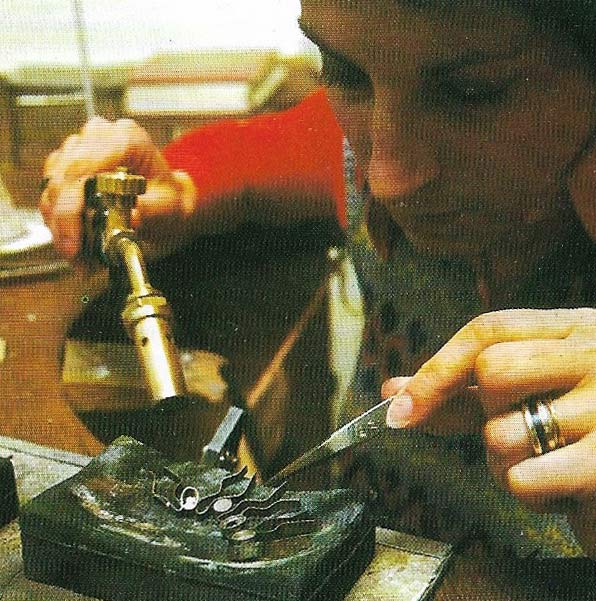 Fig 4. Jewellers fashion delicate designs in gold and liver by brazing previously shaped pieces together. A propane torch provides a fine needle flame; the delicate parts must be held with tweezers. Because precious metals are used, the jeweller must be careful to collect even the smallest pieces of waste material. Larger ornamental pieces, such as silver cups and bowls are fashioned from a flat sheet which is beaten with a round-headed mallet on a leather cushion until the required shape gradually emerges. Final shaping may be done on a series of anvils designed specially for this purpose. 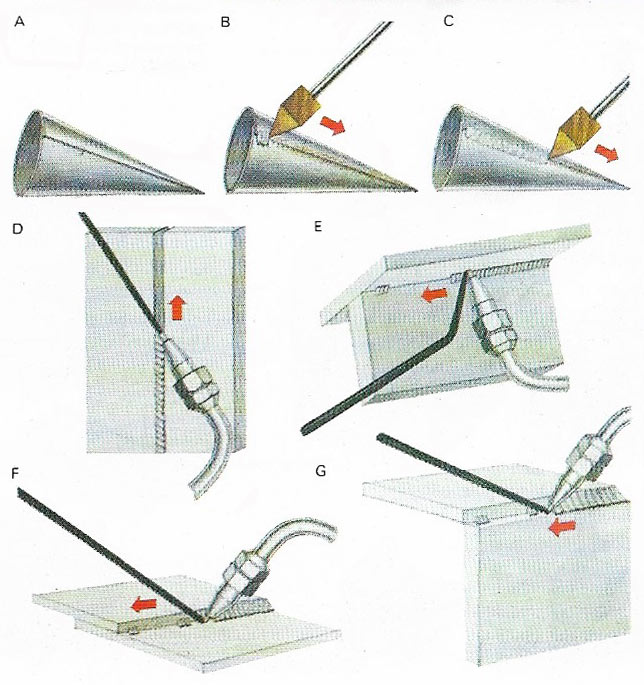 Fig 5. Soldering can be used for joining sheet metal, particularly copper and brass. In making this seam, the metal is first bent into shape (A). The metal is treated with a flux (to clean the edges to be joined) and the two edges "tinned" with a thin film of solder (B). Finally a hot soldering iron is passed along the joint to fuse the two tinned edges together (C). There are various ways of joining sheet metal by welding. Butt welds can be used to join tow plates in line (D) or at right-angles to each other (E). A lap joint (F) is welded on each side and a corner joint (G) has a fillet of weld run along each seam. 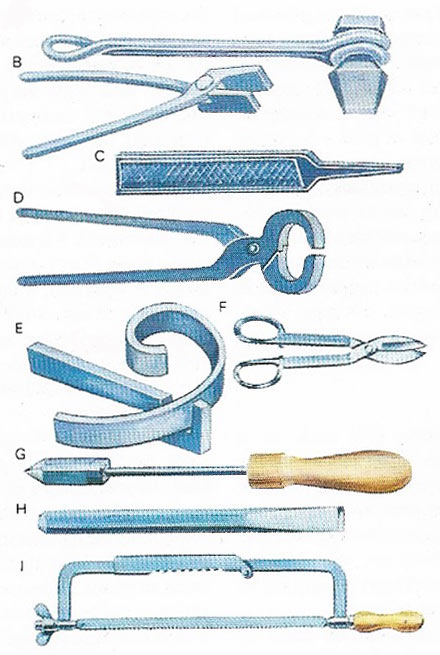 Fig 6. Tools for hand-working metals have changed little over the centuries. Cutting tools have either a single chopping blade (like a chisel), two shearing blades (like scissors) or many blades (as a saw or file). Other tools were devised for gripping the hot metal while a workman bent or cut it. Blacksmith's tools shown here include a hot set (A) for cutting iron softened at red heat, plain tongs (B), horse rasp (C), hoof clippers (D) and a scrolling dog (E) for bending wrought iron. Also shown are tin snips (F) for cutting thin sheets, soldering iron (G), a cold chisel (H), which is used on cold metals as opposed to hot metals, and a hacksaw (I).

Most metals conduct heat and electricity well and many common metals can be mixed together to form alloys – substances with properties different from those of the parent metals but more useful in particular applications. Primitive man was not aware of many properties of metals, yet appreciated their toughness and durability, their hardness, and their ability to be worked into almost any desired shape. It was also found that some metals retain an untarnishable luster. Because of this, and their attractive appearance and rarity, these metals were used for money and personal adornment and became known as "precious".

Civilized people of 6,000 years ago had learned to work with gold, copper, silver, and probably tin. The earliest metallurgy stemmed from the discovery of native metals (which occurred naturally in their metallic state), but gradually man learned how to extract metals from minerals – metallic compounds – by heating them in a furnace, usually in the presence of charcoal. By about AD 1400 water-driven bellows could make a furnace so hot that even iron could be smelted.

Once metal could be melted it could be cast by pouring it as a white-hot liquid into a mold and leaving it to cool. Gradually men learned how to make more complicated molds, designed to open so that the cast object could be extracted. But the most important early method of shaping metals was forging. The metal is not melted, but merely softened by being heated to a bright orange; then it is shaped by blows from a hammer. The smith (Fig 1) developed the anvil and an increasing range of shaped tools for hammering against hot metal (Fig 6). He learned to know the quality of metal by eye, to judge its exact temperature and to shape it accurately before it cooled. Medieval swordsmiths had to fashion blades that were hard (and therefore tended to be brittle) on the outside, to take a keen cutting edge, yet tough and supple inside.

Over the centuries a host of familiar objects gradually matured, differing from one region or country to another but each serving its purpose. Knives, plowshares, horseshoes, door hinges, clasps, roasting spits, fire-irons, and spurs were typical everyday objects made with no prior drawing or measurement but simply by skill and experience. The art of the jeweller also relied wholly on the craftsman's experience (Fig 4) and on his manual dexterity in fashioning objects that were both valuable and delicate.

It was in the making of jewelry that men first used the technique of soldering (Fig 5), in which a special alloy with a low melting-point is used to join other metal parts. It was also in jewelry that metals were first beaten out into thin wires, although during the Renaissance a way was found to "draw" wire by pulling it through a small hole.

The ability to be drawn is a characteristic of metals, stemming from their tensile strength and ductility (ability to change shape without breaking). Because the earliest metals were all fairly soft unless specially treated, for example as sword edges, they could be readily cut and pierced. This had to be done hot with large items, but small objects could be shaped cold. The most delicate work of all was the beautiful technique of inlaying patterns of one metal into recesses in another metal of contrasting color. Sometimes the inlaid pieces were secured by hammering the edges of the recesses. But in other cases soldering or brazing was employed, the latter using a brass (an alloy of copper and zinc), which was melted and run into the joints.

By 1800 the technique of welding metals using a hot gas flame was being developed and by the end of the century it had reached a high degree of perfection and been supplemented be welding with an electric arc. Welding, in which some of the metal is melted, exerts a profound effect on the metal's properties and much patient research was needed to find the best methods while simultaneously avoiding distortion caused by the severe heating.


The value of hand tools

Craftsmen using hand tools with the manual skill and judgment born of experience often provide the most efficient solution to many metalworking problems, especially where tasks are essentially creative or the objects made to individual order.

The same is true in countless jobs in which metalworking plays a part, such as building construction, plumbing, farming, motor bodybuilding and repair, and in what have become known as do-it-yourself handyman tasks about the home. A special part is played by artists who work with metal, either in creating jewelry or in the larger forms grouped under the heading of sculpture (Fig 3).

Most of these tasks involve some form of joining, such as welding or soldering, and a few require a forge. All hand tools such as shears, hacksaws and files to cut, shape and trim metal while cold. In nearly every case the precise dimensions are unimportant, provided that mating parts fit precisely. Even a watch-repairer normally works either by inserting a standard new part or making existing parts fit by eye and by feel. In modern manufacturing industry, however, the aims are entirely different. Mass-production of successive identical items usually calls for metalworking machines instead of slower human craftsmen.