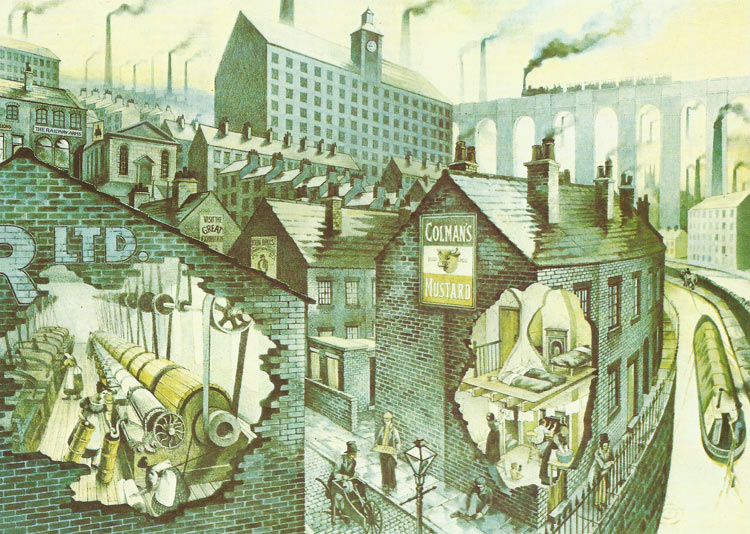 The Industrial Revolution began in Georgian and Victorian Britain. Based on coal and iron, and powered by steam, the world's first industrial society could by the mid-19th century claim to be the "workshop of the world" and stage a Great Exhibition of Trade and Industry at the Crystal Palace in London's Hyde Park in 1851. One of the products of this industrialization, and the one that probably most affected the way of life of the people, was the factory town. By 1851 in Britain, more people lived in towns and cities than in country areas. Mills often dominated the urban landscape. Their steam-powered machinery demanded that men, women, and even children work for 72 hours a week, often in dangerous and unhealthy conditions. Textile mills produced cotton and woollen cloth and yarn to be exported throughout the world. Shown here (left) are carding machines and spinning jennies. Iron foundries made everything from pots and pans to great iron beams and girders and, of course, the machines themselves. But neither machines nor products would have been any use without an efficient transport system. Improvement of natural waterways and then the digging of hundreds of kilometers of canals (right) provided a transport network linking all the major industrial centers. The itinerant navvies (short for navigators) dug the canals, at first largely by hand using picks, shovels, and wheelbarrows. With the coming of the railways in the 19th century the navvies took on the task of making cuttings and building huge earth embankments. The railways completed the transport system. 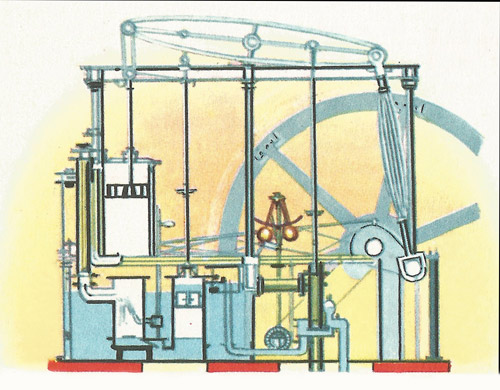 James Watt's steam engine, which led to the rapid development in modern industry.

As scientific machines began to replace manual workers, so a new type of civilization began to appear. Centuries earlier, the Greek scientists of Alexandria had made important dis cove rei es, but they did not apply them to producing more wealth or to saving man-power – possibly because there was plenty of slave labor at that time.

It was not until the 18th century that scientific thought and experiment were applied to the needs of everyday life and trade and industry. England was the country where the Industrial Revolution began.

At first the Industrial Revolution brought much misery to the people of Britain; the conditions of work in the early mines and factories were appalling. It was only later that there was prosperity and a higher standard of living.

The Industrial Revolution could not have started at all in Britain without plentiful supplies of coal and iron. Fortunately these were readily available. Iron had been used in Britain since the days of the Phoenician traders, and iron furnaces had been stoked with wood from the English forces, especially the Sussex Weald. But as long as wood remained the only fuel, output was small and there could be no machinery on a large scale. Then, early in the eighteenth century, new methods of iron-smelting were devised, using coal instead of wood, and gradually the iron industry moved north, to the coalfields of the Midlands and the north of England.

As the demand for coal grew, a primitive type of steam engine, invented by Thomas Newcomen, was used to pump water from the mines. But the true age of steam began when James Watt, of Greenock near Glasgow, patented his own steam engine, in which the cylinders and condensers were separated, thus economising heat. For the first time, the piston was driven by steam instead of by atmospheric pressure. Watt later went into partnership with a Birmingham businessman, Robert Boulton, and for 13 years he and his assistant experimented until they perfected steam engines for every purpose. They were used in collieries, Cornish tin mines, rolling-mills for making sheets of iron, the Wedgewood pottery works and, in 1785, the steam spinning-mill. Six years after Watt's death, steam was harnessed to transport, when George Stephenson's first locomotive carried passengers from Stockton to Darlington, and, later, from Liverpool to Manchester.

Meanwhile, water provided cheap transport for the coal, which was feeding new industries. A network of canals spread over England, linking the Trent with the Mersey, the Black Country round Birmingham with the Severn, and the Potteries with Cornwall, which supplied their china clay.

The textile revolution began slowly, gathering speed as it went on. . In 1735 John Kay of Lancashire invented the flying shuttle , which doubled the speed of weaving. Richard Arkwright of Preston patented his water frame, a spinning machine driven by a water wheel, in 1769. Then James Hargreaves, a Blackburn weaver, invented the spinning jenny, named after his wife, which could spin several strands of yarn at once by using many spindles instead of one. By 1779 Samuel Crompton had combined these ideas in his spinning mule which could produce the finer thread needed for muslin.

These new inventions often brought great hardships to the workers, for the machines did the work of several men, and consequently reduced the number of men employed. Another development, following the invention of the power loom by Edmund Cartwright (1785), was that spinning and weaving could no longer be carried on in workers' cottages, but began to be concentrated in factories.

Meanwhile the cotton trade grew until by 1806 one-third of all British exports consisted of cotton goods. The industry was concentrated in Lancashire, where plentiful streams and cheap coal supplied water and steam power. The damp climate was suitable for spinning; and the port of Liverpool imported raw cotton from the West Indies and the United States in ever-increasing quantities, and then exported the finished product. Changes in the woollen industry, centered in West Yorkshire, came more slowly, but the effects of machinery were the same as with cotton.

As small mills were replaced by large, prison-like factories, hundreds of women and children worked, for lower wages than men, up to fifteen hours a day. Children were cruelly treated to keep them awake through the long hours. The mill-owners had often risen from poverty through hard work and toughness, and – with honorable exceptions like Robert Owen of Lanarkshire – had little sympathy for their workers. The hand-loom weavers, like George Eliot's Silas Marner, were ruined because no government of the day would protect them by fixing a minimum wage. The political economists, who had great influence, honestly believed that State intervention would be fatal to industry and trade.

Gradually, however, the conscience of the people was stirred by the appalling life of the women and children in the mills. In 1830 Richard Oastler began his campaign against child labor in the woollen mills, and in 1833 the first effective Factory Act reduced employment of children under nine. The Factory Act of 1847, the work of Lord Shaftesbury, limited factory work to 10 hours a day. These laws marked the end of one of the worst periods of human misery, which was the price of Britain's Industrial Revolution.