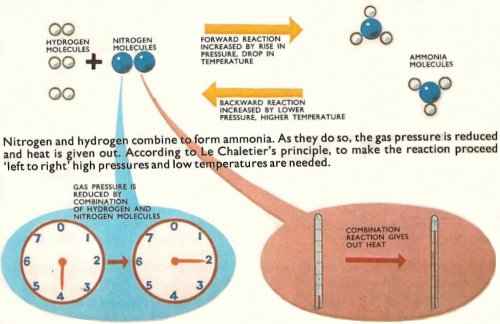 Le Chatelier's principle, announced in 1888 by the French chemist Henry Louis Le Chatelier (1850–1936), states that if a system in a state of chemical equilibrium is disturbed, the system tends to neutralize the disturbance and restore the equilibrium. It is especially applicable to reversible processes in chemistry.

For example, if volumes of hydrogen gas and iodine vapor are mixed the compound hydrogen iodide is formed:

Consider how this principle can be applied in the case of the reversible formation of ammonia from nitrogen and hydrogen (see Haber process). Four molecules (one of nitrogen, three of hydrogen) combine to make two of ammonia. Furthermore, heat is given out in this reaction:

The yield is affected by a change in temperature, too. According to Le Chatelier, a reduced temperature should increase ammonia yield because the reaction will proceed in such a way as to give off more heat, to counteract the drop in temperature. This is accompanied by an increase in ammonia formation.

But there is a complication here, because although the final proportion of ammonia present is increased the drop in temperature reduces the rate of the reaction, so the result takes longer to be achieved.

For this reason, the temperature in the industrial production of ammonia is not kept much below 500°C.

Lastly, the change in concentration of the reagent has an effect on the final equilibrium yield. If, for example, nitrogen is added, Le Chatelier's principle tells us that the reaction proceeds "left to right" to counteract this, so more ammonia is formed. The same thing applies if more nitrogen is added, or ammonia removed.