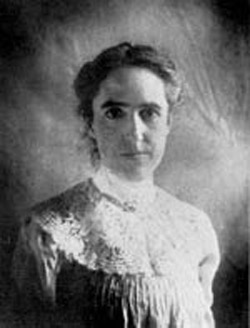 Henrietta Swan Leavitt was an American astronomer who discovered the period-luminosity relation of Cepheid variables. Having graduated from Radcliffe College (1892), she joined Harvard College Observatory in 1895 as a volunteer research assistant, receiving a permanent post in 1902. Like her colleague Annie Cannon, she was extremely deaf. In 1907 the director of the observatory, Edward Pickering, announced plans to redetermine stellar magnitudes photographically, previous estimates having been only visual. Leavitt was made head of the department of photographic photometry and it was while studying photographic plates made at Harvard's field station in Peru, that she discovered in 1912 that Cepheid variables show a simple relationship between period and luminosity. Using Leavitt's work as a springboard, first Ejnar Hertzsprung, then Harlow Shapley, and finally Walter Baade, were able to use the Cepheids as a cosmic distance indicator. Leavitt also did much work on other variable stars, discovering about 2,400 – roughly half of those known in her time.