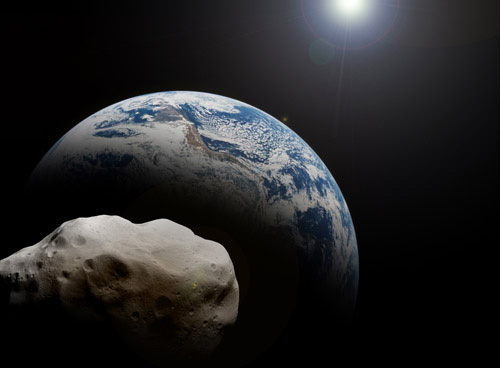 Artist's rendering of a 10-kilometer-wide asteroid on a collision course with Earth. Artwork © Jeff Darling. 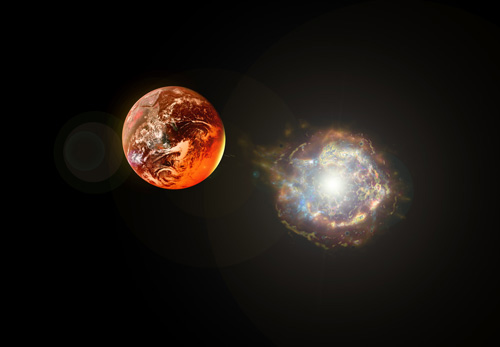 An Earthlike planet about to be destroyed by a nearby exploding star. 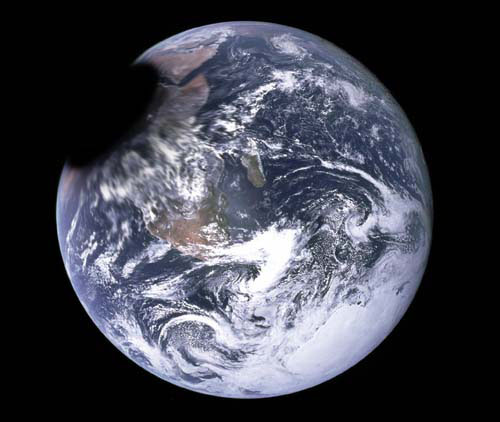 Earth being consumed by a small black hole. 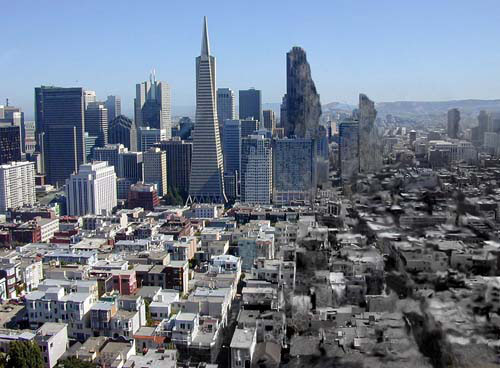 A megacatastrophe is an event of cataclysmic proportions that causes death and destruction, regionally or globally, and may be large enough to threaten the existence of human civilization, all or much of terrestrial life, the Earth itself, or, in some extreme scenarios, the entire universe. Natural megacatastrophes have happened in the past and will inevitably occur again in the future. Added to these is now the potential for artificial or human-caused megacatastrophes.

Megacatastrophes in the past have been responsible for some mass extinctions. The most recent of these took place about 65 million years ago and, scientists now agree, was due in large part to the collision with Earth of a sizable asteroid that collided with the Earth in what is now the Yucatan peninsula of Mexico, creating the Chicxulub Crater. A catastrophe on a vastly larger scale happened in the much more distant past when a Mars-sized planet collided with the Earth and threw out sufficient material to form the Moon. It is a certainty that other asteroids will strike our world in the future unless we find ways to destroy or divert them. Asteroids that may pose a threat to us are known as potentially hazardous asteroids.

Natural events that pose a threat to ourselves, other life, or Earth itself are of various kinds, some intrinsic to our planet, others originating outside. Among them are:

1. Asteroids and comets in orbits that could potentially intersect the orbit of the Earth.

2. Collision with other astronomical bodies, such as rogue planets and black holes.

3. Nearby supernovae and gamma-ray bursts.


Human-caused and other artificial megacatastrophes

Increasingly, human beings are posing a danger to themselves and their world through their activities. These threats include:

5. New diseases to which we have little or no immunity

6. Invasion by an extraterrestrial race.