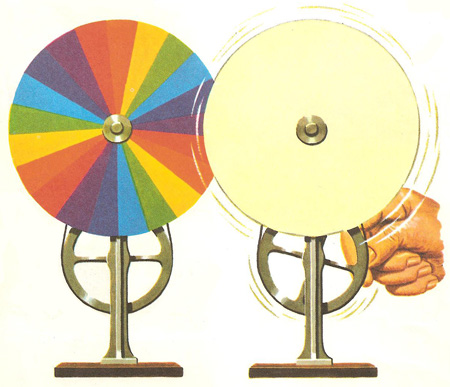 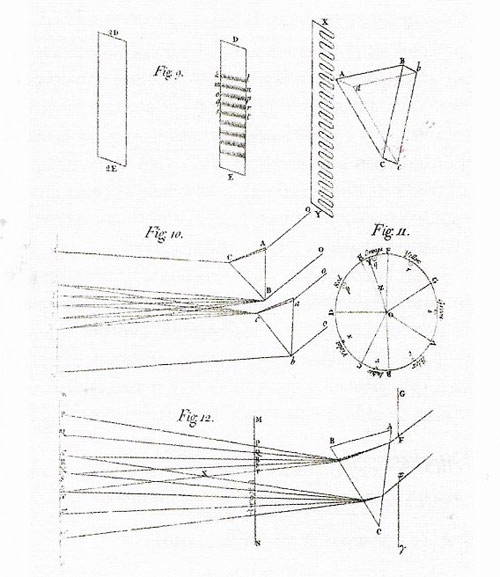 The English mathematician and natural philosopher Isaac Newton made many important contributions to the study of physics, even apart from his famous laws of motion and law of gravity. It has been said that his study of light alone would have placed him among the front rank of scientists.

In about 1666 Newton passed sunlight through a triangular glass prism and obtained a spectrum of colors. The sunlight was dispersed (split up) by the prism into its component colors, and spread out on paper. This is the same effect as in the rainbow (where the raindrops act as prisms). Although theories of the rainbow had been put forward at least half a century before this, Newton cleared up the subject by passing the spectrum back through another prism and producing white light once more. This was final proof that white light is made up of all the colors of the rainbow or spectrum.

To demonstrate the effect of mixing all the colors of the rainbow, Newton devised a wheel with segments colored red, orange, yellow, green, indigo, and violet, which could be spun around by turning a handle. When the disk is spun quickly, the colors blur together and the eye cannot distinguish between the individual bands of color and perceives white. The was first described in Newton's great work Opticks (1704). The size of each colored sector was proportional to the corresponding width in the spectrum.

When mixing pigments of opposite colors on the wheel – the complementary colors – Newton found that "some faint anonymous color" resulted. He was unable to mix pigments of opposite hues on the wheel to make white because pigments are based on subtractive color, unlike light, which is additive color. He surmised that complementary colors cancel each other's hue.

His concept was demonstrated more thoroughly in the 19th century by physicists and color theorists, such as Ogden Rood (1831–1902). Rood's book Modern Chromatics (1879) includes the Rood color wheel. He emphasized that artists needed a knowledge of complimentary hues in order to be able to reveal applied colors in their natural brilliance. A version of Newton's color wheel without the indigo hue was adopted by painters to describe complimentary colors that cancel each other's hue to produce an achromatic mixture of white, gray, or black. Newton's color wheel was used in the study of mixing color. Knowledge of how complimentary colors work together led to art movements such as Pointillism in about 1886.