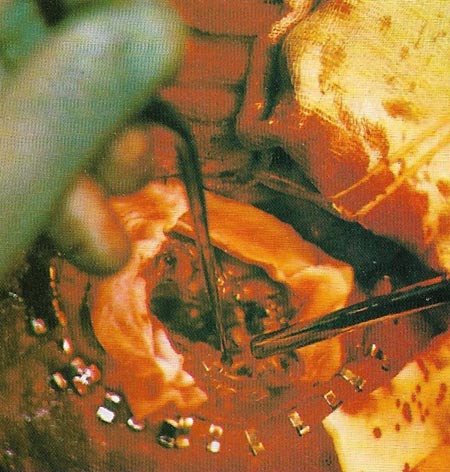 Fig 1. Brain surgery is most often performed after injury to the brain associated with a skull fracture. Such fractures are most commonly caused by car accidents. Brain surgery is usually directed towards stopping bleeding or the removal of blood clots (hematomas). Other types of brain injuries (lesions) that necessitate surgery include brain tumors and the rupture of weak spots or aneurysms in the walls of blood vessels in the brain. Diagnosis of brain damage and disease was revolutionized in the 1970s by the EMI scanner. With this machine the brain could be visualized in serial cross-sections. 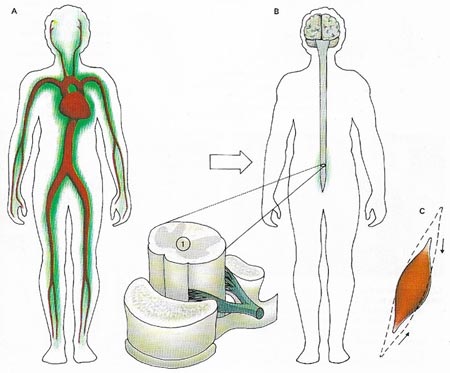 Fig 2. Tetanus, popularly called lockjaw, is caused by wounds infected with clostridium tetani bacteria. These produce a poison that does not affect the wound but is carried (A), often by the bloodstream, to the central nervous system (B) where it becomes concentrated in the nerve cells of the spinal cord (10. The normal control of muscle action that takes place in the spinal cord is completed by messages from the brain that modify signals passing out to the muscles via the motor nerves. The tetanus toxin acts by blocking the biochemical reactions essential to the completion of the nerve pathway. Thus the muscles cannot relax and go into spasm. 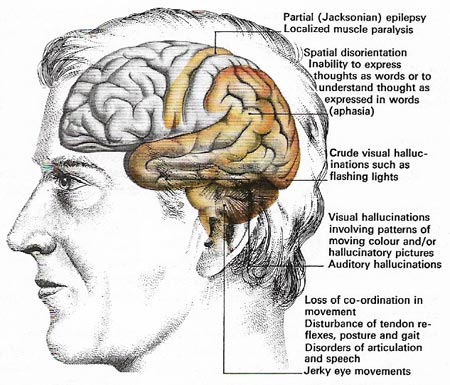 Fig 3. The symptoms that result from brain damage may reflect the particular function of the injured area of the brain. Some examples of such symptoms are indicated here. The specific effects of certain brain injuries have been of great use in producing physiological 'maps' of the brain. 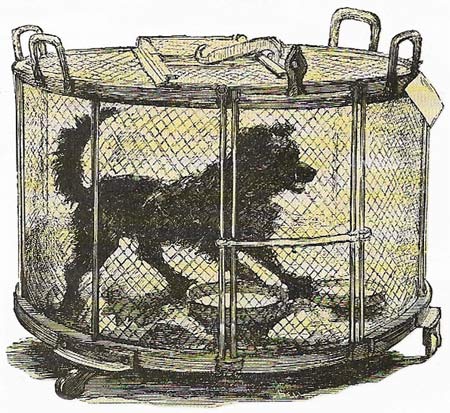 Fig 4. Rabies is a fatal disease that selectively attacks the brain. It is caught from the bites of infected animals, particularly dogs. Louis Pasteur (1822-95) developed the first rabies vaccines from the saliva of "mad" dogs. 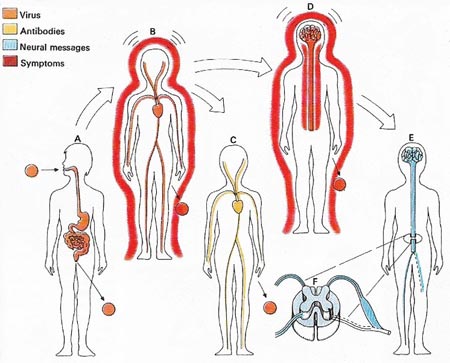 Fig 5. The polio virus enters the body by the nose or mouth (A), incubates in the intestine and then enters the bloodstream (B) causing headaches, fever and vomiting. The body now "fights back" by releasing antibodies (C), which may effect a complete recovery and also confer immunity against another attack. Or the virus may continue to multiply, reach the brain and spinal cord, and destroy nerve tissue (D). The result is that the nerves can no longer send out messages to the muscles (E) to effect contraction and the muscles (usually of the limbs) become paralysed. The enlarged section of the spinal cord (F) shows the damaged area (black) and its "dead" nerve.


physical damage to the brain

The brain is often compared to a computer, but unlike a computer does not totally break down from minor damage. The skull provides fairly good protection but a knockout blow on the head may cause temporary amnesia (loss of memory) or concussion, which can be thought of as temporary brain damage.

Fracture of the skull can cause physical damage to the brain. This, in turn, can result in cessation of activity in body muscles whose actions are controlled directly by the brain. Because the skull in an infant is not fully closed the brain is more liable to damage, and physical damage, although rare, can occur during birth.

The more usual cause of damage is from within. In some people the arteries of the brain are fragile and can bulge out like a weak tire, a condition doctors call aneurysm. The great danger of this is that the artery may burst, causing bleeding into the brain. This is a cerebral hemorrhage in which the patient may become paralysed, and which can be fatal. A stroke, which involves a sudden loss of cerebral function, may be caused by the hemorrhage of a central vessel or by blood clot or thrombus within a vessel.

Tumors in the brain cause physical damage by pressure they extent and other damage by the loss of brain tissue to the tumour. With modern techniques such tumors can in some cases be easily located and removed by surgery.

The brain is also sensitive to chemical damage. This can arise in various ways. Some of the chemicals that find their way into the diet can affect the brain. Chronic lead poisoning, for example, causing tumors and paralysis, was once a problem in soft-water areas when lead piping was used for domestic water supplies, because soft water dissolves lead. In some disorders of metabolism normal body chemicals build up to such a level that they cause damage to the brain. Phenylalanine, a constituent of body proteins, is one such substance. In the inherited disease called phenylketonuria it is created to excess and causes mental retardation.

The chemicals harmful to the nervous system (neurotoxins) can be produced by bacteria that invade any part of the body and reach the brain via the bloodstream or via nerve trunks. The neuritis of diphtheria is caused solely by the toxin the diphtheria bacilli produce. Some bacteria release toxins that affect only nerve tissue. The food-poisoning organism Clostridium botulinum produces a neurotoxin that causes fits, double vision, paralysis, and death. Some other micro-organisms seem to infect the central nervous system preferentially. The rabies virus, for example, specifically attacks the nervous system (Fig 4), as does the virus causing poliomyelitis which, by attacking groups of motor nerves, paralyses the muscles whose movements they control (Fig 5).

Some micro-organisms that normally cause infections elsewhere find their way into the brain tissue (causing encephalitis) or its surrounding membranes or meninges (causing meningitis), Untreated syphilis can eventually cause an encephalitis, a can measles in about one case in 3,000. Pneumonia and tuberculosis can both cause meningitis, but as with all microbial infections the modern advances in vaccination have reduced the incidence of disease, and antibiotics have in some cases controlled the spread of infection.

In degenerative diseases of the nervous system the nerve tissue undergoes chemical changes that stop it working properly. In multiple sclerosis, the most important of these, there is patchy hardening of the myelin that insulates the nerves, causing an intermittent loss of function whose locality depends on the exact bundles of nerves affected. Muscle paralysis and speech disorders are two examples of degenerative diseases.

Because some parts of the brain perform distinct jobs the symptoms of disease are often dictated by the area affected. Aphasia, for example, a disturbance in the ability to speak, write and comprehend words is due to damage in the area that controls speech. Parkinson's disease, in which the body trembles when at rest but becomes rigid at other times, is due to destruction of nerve cells at the base of the brain that are involved in the control of movement. The drug L-DOPA now helps manyl patients with Parkinson's disease. Yet one of the most remarkable things about the brain is that damage to some areas produces no detectable defect at all, as if the other cells take over the activities of the damaged ones. Physiologists specializing in the study of the nervous system have made great advances in discovering the causes of disease, but epilepsy remains a mystery, although scar tissue, a tumour or fever can be causes.