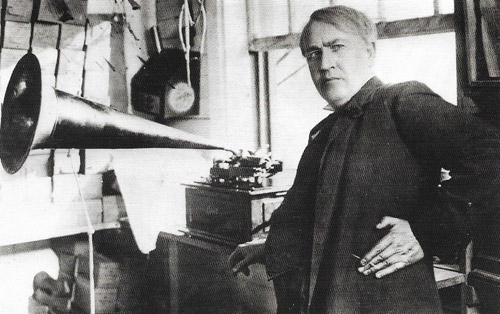 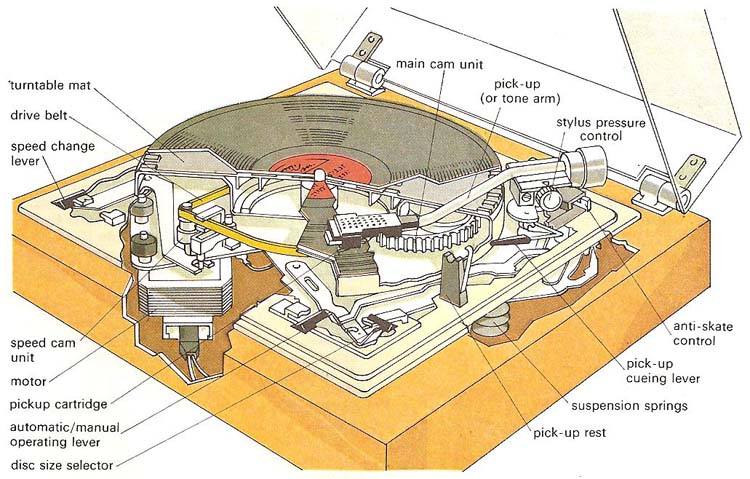 A phonograph, also called a record player, is an instrument for reproducing sound recorded mechanically as modulations in a spiral groove. It was invented by Thomas Edison in 1877. Up to that point, every sound, once it had faded, was gone forever. Musical performances, however magnified, were lost, and no one could keep a record of a loved one's voice; only listeners' memories kept sounds from oblivion.

Edison helped to bring that situation to an end by inventing a machine to transcribe messages for use in telegraphy. His mechanic, John Kruesi (1843–1899), built a working model for him during the late summer or autumn of that year, and in Dec he showed the machine to staff of Scientific American, which published an article on it. Edison filed for a patent in the same month, which was granted in Feb 1878. This first phonograph had a revolving grooved cylinder covered with tinfoil. Sounds waves caused a diaphragm to vibrate and a stylus on the diaphragm made indentations in the foil. These could then be made to vibrate another stylus attached to a reproducing diaphragm. Wax disks and cylinders soon replaced tinfoil, then, when by etching or electroplating metal master disks could be made, copies were mass-produced in rubber, wax, or plastic.

Edison's invention represented the first method of recording sound for playing back at a later time, a truly revolutionary device, and one that changed both the experience of its hearers. The phonograph could restore to life, as U.S. journalist Ambrose Bierce put it, "dead noises."

Further development of the gramophone was left to others, including Scottish-born inventor Alexander Graham Bell who, with Charles Tainter (1854-1940), designed a Prototype using a wax cylinder incised by a floating stylus. Bell and Tainter suggested a joint development of the idea with Edison, but the latter refused, preferring to market his own version of the phonograph, via a new company founded in 1887.

The phonograph was used for speech recordings and as a dictaphone. By the early part of the 20th century, however, the rotating cylinder had given way to the disk, or record, which produced better quality recordings of music. The rest of the century saw new versions of the gramophone, with 78 rpm (revolutions per minute), 45 rpm, and 33 1/3 rpm models, culminating in the digital technology of the compact disk player.

The main parts of a record player (Fig 2) are the turntable to rotate the disk at constant angular velocity; the stylus, which tracks the groove and vibrates with its modulations; the pickup or transducer that converts these by the piezoelectric effect or electromagnetically into electric signals. See also amplifier and the loudspeaker.