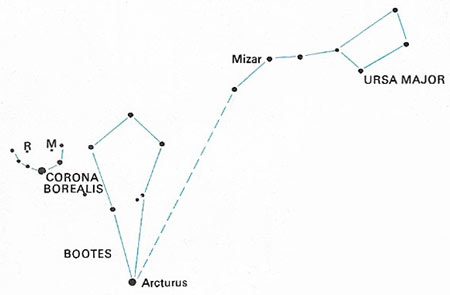 R Coronae Borealis lies in the bowl of Corona Borealis not far from Arcturus. It is normally about the sixth magnitude, so that, together with the most useful comparison star (M) with a magnitude of 6.6, it can clearly be seen with binoculars. At some minima R Coronae drops to 15 and cannot be seen through moderate-sized telescopes.

An R Coronae Borealis star is a luminous, eruptive variable supergiant, rich in carbon and poor in hydrogen, of spectral type F or G, unusual in that it goes into outburst not by brightening, but by fading. Each minimum is thought to be caused by carbon-rich material puffed off the star during a pulsation cycle. As the cloud moves out, it cools and eventually condenses into carbon dust particles, which absorb much of the light coming from the star's photosphere. Only when the dust has been blown away by radiation pressure, does the star return to its normal brightness. While at maximum light, R Coronae Borealis stars are observed to undergo small-scale, Cepheid-like variations with fluctuations of several tenths of a magnitude and with periods of 20 to 100 days.

Typical is the behavior of R Coronae Borealis (R CrB), the prototype of the class. R CrB is an F8 or G0 Ib supergiant whose variability was discovered nearly 200 yr ago by Edward Pigott. Most of the time, R CrB is at its maximum of around magnitude 6. But at irregular intervals it goes, over a period of several weeks, into a decline of up to 8 magnitudes. The star may remain faint for many months or have several recoveries and declines in succession. Often the final rise back to maximum light is slow, taking several months to a year.

The RCB phase is probably fairly short-lived, maybe on the order of 1,000 years, as evidenced by the fact that less than 50 of these stars are known. Their evolutionary status is uncertain, though there are two main theories: (1) the Double Degenerate (DD) model or (2) the Final Helium Shell Flash (FF) model. Both involve the expansion of white dwarfs to the supergiant phase. The DD model invokes the merging of two white dwarf stars, while the FF model assumes that a single white dwarf star expands to the supergiant stage by means of a final helium flash.