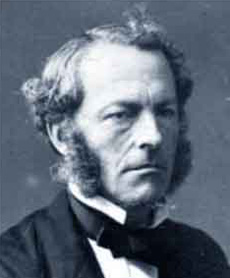 George Stokes was a British mathematician and physicist, born in Ireland. He was professor of mathematics (1849–1903) at Cambridge and served as president (1885–92) of the Royal Society.

Stokes is celebrated for his law of viscosity (see below), which describes the movement of a solid sphere in a fluid. It forms the basis of the modern theory of viscous fluids.

He also developed an important theorem of vector analysis, accurately described and named fluorescence, and proposed the concept of an ether. Stokes' book, Dynamic Theory of Diffraction (1849) was an important work in the wave theory of light. He was a pioneer of geodesy.

Stokes' law is a formula that gives the terminal velocity at which particles fall in a fluid (liquid or gas). For particles of radius r (less than 0.1millimeter) the terminal velocity is 2(d1 - d2)gr 2/9ρ, where d1 and d2 are the densities of the particle and the fluid, g is the acceleration due to gravity, and ρ is the viscosity of the fluid. Stokes' forms the basis of the modern theory of viscous fluids.