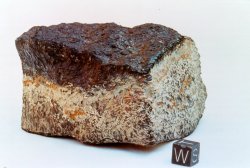 The larger of two fragments of the Los Angeles meteorite – a shergottite found in the Mojave Desert. Image: © Ron Baalke.

Shergottites are the most abundant type of the so-called SNC meteorites, believed to have come from Mars (see also Mars meteorites). More than two dozen examples are known. The type member is the 5-kilogram (11-lb) Shergotty meteorite, which fell in Shergotty, Bihar, India (24° 33' N, 84° 50' E) on August 25, 1865.

Shergottites are igneous rocks of volcanic or plutonic (formed deep under the surface) origin. They resemble terrestrial rocks more closely than do the members of any other achondrite group. All have exceptionally young crystallization ages of 150 to 200 million years, and usually show signs of severe shock metamorphism. Typically, the plagioclase in shergottites has been converted to maskelynite, a glass that is produced when plagioclase is subjected to high shock pressures. The maskelynite was probably formed as a result of the impacts that ejected the shergottites from the Martian surface.