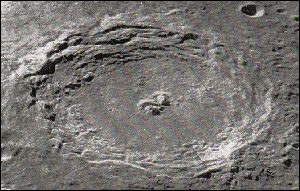 Transient lunar phenomena (TLPs) are any kind of unusual short-lived activity or events seen on the Moon. TLPs reported over the years have included red glows, flashes, obscurations, and abnormal albedo and shadow effects. Unfortunately there is no unambiguous photographic or photometric record of such an event and some authorities are inclined to dismiss LTPs as either aberrational effects in Earth's atmosphere, changes in lunar lighting conditions, or outright illusions.

Accounts of TLPs go back as far AD 557. Most are visual reports of bright spots, flashes, hazes, and curious temporary colorations of the lunar soil. Reputable observers such as William Herschel, Wilhelm Struve, and E. E. Barnard claimed to have seen them. About 200 of some 30,000 lunar features visible in telescopes have been recorded as LTP sources. Half have shown activity only once. Of the remainder, a mere dozen features contribute three-fourths of all reports. One area, the Aristarchus-Herodotus-Schroters Valley, is responsible for one-third of the total number sighted.

Among the more famous sightings, on the night of 2–3 November 1958, Soviet astronomer Nikolai A. Kozyrev saw something strange while making spectrograms of the crater Alphonsus with the Crimean Astrophysical Observatory's 50-in reflector. As he watched through the telescope's guiding eyepiece, he saw the crater's central peak blur and turn an unusual reddish color. He reported that spectrograms confirmed his impression of an anomalous event, showing the emission spectrum of carbon vapor.

On 19 July 1969, Apollo 11 crew had just achieved lunar orbit when Mission Control received word that amateur astronomers had reported transient phenomena in the vicinity of the crater Aristarchus. Asked to check out the situation, Neil Armstrong looked out his window and observed an "area that is considerably more illuminated than the surrounding area. It just has ... seems to have a slight amount of fluorescence to it." Although he wasn't sure, Armstrong believed the region was Aristarchus.

Before the Apollo landings, TLPs were often explained in terms of minor volcanic activity. But it now seems certain that the Moon has been geologically dead for over three billion years (aside from the odd minor moonquake caused by tidal forces). Other possibilities, however, remain. Shortly after a large flare erupted on the Sun in 1963, Zdenek Kopal and Thomas Rackham at Pic du Midi Observatory in southern France photographed a local brightening around the craters Copernicus, Kepler, and Aristarchus. Kopal proposed that energetic particles from the flare caused lunar rocks to fluorescence. Such activity might be expected especially at full phase when the Moon passes through the Earth's magnetosphere, where solar wind particles become trapped.

In 1992, the veteran lunar observer Audouin Dollfus saw a series of glows on the floor of the crater Langrenus in 1992 using the one-metre (39-inch) Meudon reflecting telescope of the Observatoire de Paris. Dollfus believes that the glows are due to escaping gas that lifts dust above the lunar surface into sunlight. He points out that Langrenus, when observed in detail, has an extensive series of fractures on its crater floor and the gas could be escaping from these. In 1994, the Clementine lunar orbiter observed Aristarchus before and after a TLP was seen from the Earth. Spectral data from the probe suggested that parts of the crater had changed colour slightly. Despite teh various evidence that has accrued, the nature and even the existence of TLPs as real physical phenomena remain open issues.