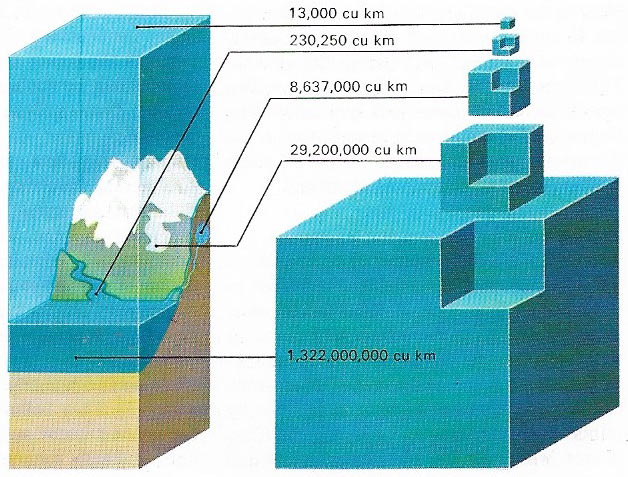 The total water supply of the world is estimated to be about 1,360,000,000 cubic kilometers, and 97.2 percent of it forms the oceans. Of the remainder, 2.15 percent is frozen in ice caps and glaciers, and most of the rest is in rivers and lakes (0.0171 percent) or under land areas as ground water (0.625 percent). Water vapor represents only 0.001 percent but this quantity is vital: without it there would be no life on Earth.

About 97 percent of the world's available water is in the oceans. Oceanic water is salty and unsuitable for drinking or for farming. In some desert regions, where fresh water is in short supply, seawater is desalinated to make fresh water. But most of the world is constantly supplied with fresh water by the natural process of the water cycle which relies on the action of two factors: the Sun's heat and gravity.

Over the oceans, which about 71 percent of the Earth's surface, the Sun's heat causes evaporation. Water vapor, an invisible gas, rises on air currents and winds. Some of this water vapor condenses and returns directly to the oceans as rain. But because of the circulation of the atmosphere, air bearing large amounts of water vapor is carried over land where it falls as rain or snow.

Much of this precipitation is quickly re-evaporated by the Sun. Some soaks into the soil where it is absorbed by plants and partly returned to the air through transpiration. Some water flows over the land surface as run-off, which collects into rills and flows into streams and rivers. Some rain and melted snow seeps through the soil into the rocks beneath to form groundwater.

In polar and high mountainous regions most precipitation is in the form of snow. There it is compacted into ice, forming ice sheets and glaciers. The force of gravity causes these bodies of ice to move downward and outward and they may eventually return to the oceans where chunks of ice break off at the coastline to form icebergs. Thus all the water that does not return directly to the atmosphere gradually returns to the sea to complete the water cycle. This continual movement of water and ice plays a major part in the erosion of land areas.

Of the total water on land, more than 75 percent is frozen in ice sheets and glaciers as in Greenland and Antarctica. Most of the rest (about 22 percent) is water collected below the Earth's surface and is called groundwater. Comparatively small quantities are in lakes, rivers, and in the soil. Water that is held in the soil and that nourishes plant growth is called capillary water. It is retainedin the upper few meters by molecular attraction between the water and soil particles.