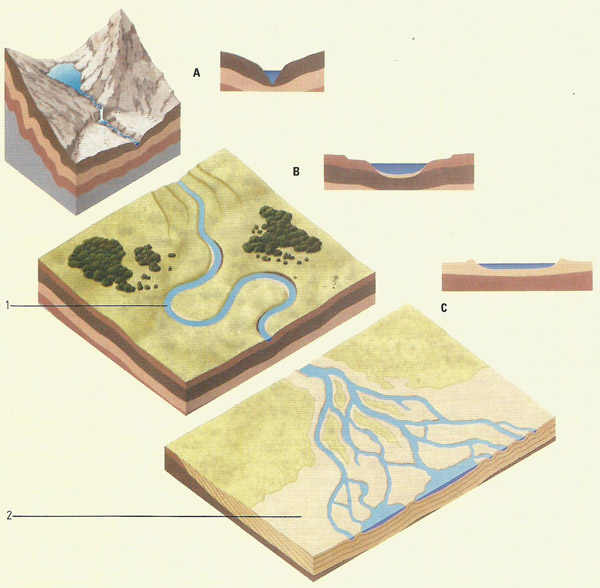 Fig 1. Young rivers (A) close to their source tend to be fast-flowing, high-energy environments with rapid downward and headward erosion, despite the hardness of the rock over which they may flow. Steep-sided "V-shaped' valleys, waterfalls, and rapids are characteristic features. Mature rivers (B) are lower-energy systems. Erosion takes place on the outside of bends, creating looping meanders (1) in the soft alluvium of the river plain. Deposition occurs on the inside of bends and on the river bed. At a river's mouth (C), sediment is deposited as the velocity of the river slows. As the river becomes shallower more deposition occurs, forming islands and braiding the main channel into multiple, narrower channels. As the sediment is laid down (2), the actual mouth of the river moves away from the source into the sea or lake, forming a delta. 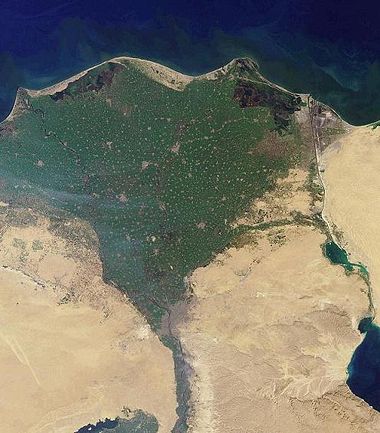 Fig 2. At its delta at the Mediterranean Sea, the Nile broadens into a large fan-shaped alluvial plain. Credit: NASA. 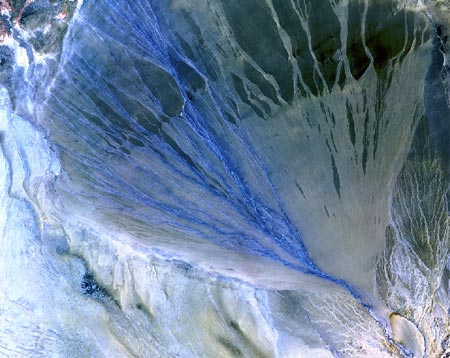 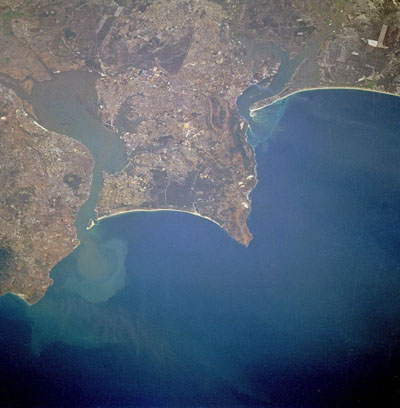 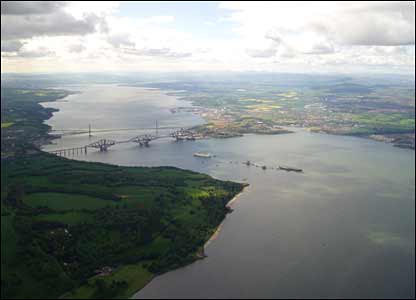 Fig 5. The Firth of Forth, near Edinburgh. 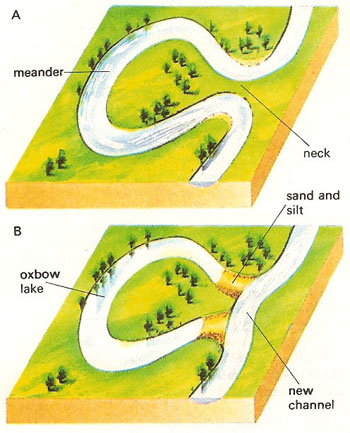 Fig 7. Oxbow lakes are formed when the neck of a looping meander is broken through (A), usually during times of flood. The entrances to the bypassed meander are soon blocked by silt (B). 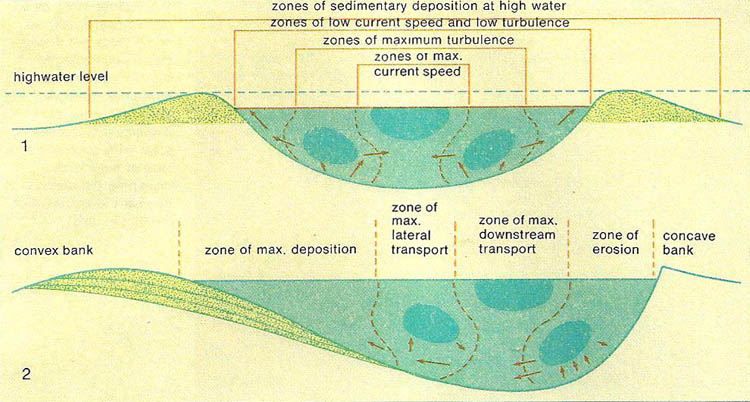 Fig 8. Process of change at work within a river. The material of the river-bed is being continually worn away, and transported and deposited elsewhere; how much and how far depends on the river's speed and turbulence. The movement of eroded material is indicated by arrows. (1) Straight river with symmetrical bed; the eroded material is deposited on the banks when the water level is high. (2) Winding river with an asymmetrical bed; material is worn off the concave bank, usually the outer side of a curve, and deposited on the convex.

A river is a body of inland water that flows downhill under gravity in a natural channel into the sea, a lake, or, as a tributary, into another river. The main sources of rivers are springs, lakes, and glaciers. Near the source a river flows swiftly, the rocks and other abrasive particles eroding a steep-sided V-shaped valley (see erosion). Variations in the hardness of the rocks over which it runs may result in waterfalls. In the middle part of its course the gradients become less steep, and lateral (sideways) erosion becomes more important than downcutting. The valley is broader, the flow less swift, and meandering more common. Toward the river mouth, the flow becomes more sluggish and meandering prominent: the river may form oxbow lakes. Sediment may be deposited to form a delta (Fig 1).

The stones and sand formed by erosion of the rock are transported downstream and are finally deposited at the mouth of the river. Erosion, transportation, and deposition are the main work of a river and most rivers can be divided into three sections: an upper course in which erosion dominates; a middle one where transportation occurs; and a lower one where deposition takes place.

Stream water erodes in two ways: chemically and physically. Weak acids such as carbonic and humic acids in the water help to decompose limestone and other rocks. The ability of a stream to erode mechanically is closely related to its speed. During normal flow little physical erosion takes place, but during flood the movement of water becomes turbulent and this causes eddies which in turn cause rapid changes in the pressure on ther ocks. Sometimes the pressure is so low that a vacuum is formed on a small part of the stream bed: as the eddy changes this vacuum implodes. Much of the babble of a brook is the sound ofimplosions. Repeated implosions cause part of the rock to be sucked into the stream and carried away. Erosion mainly takes place at this stage by stones banging into the stream bed and sides and so wearing them away. During the process the stones are broken up into smaller pebbles, so that the boulders in the upper course of the stream provide the sand grains that are present in the lower course.

The faster the stream flows the larger the fragments it can carry. It can also carry more of them. This is why most erosion and transportation occurs during floods. The finest particles are carried in suspension, kept up by the turbulent motion of the water. Eddies bounce the sand from the bottom and it is carried downstream a small distance by the current before it falls to the bottom again. Coarser material is rolled along the bed.

As the river enters its more gentle slopes, some of its sediment is dropped. Where there is a sudden change in gradient and therefore water speed, as when a river leaves the mountains and runs out onto a plain, nearly all the sediment will be dropped, forming an alluvial fan. More usually the material is deposited en route as the river current slows up. The coarsest sediment is dropped first.

During a flood, however, river water moves at different speeds. In the river channel the current is fast moving, but where the river spreads over its banks on to the surrounding land (the flood plain) the current slows down and mud and very fine sand are deposited as the water leaves its channel. This forms a ridge or levee along each bank.

The long profile of a river – the plot ofthe elevation of the river against distance traveled with a suitable vertical exaggeration to show significant features – is theoretically a part of a hyperbola, being steepest at the source and flattening at the mouth. This is an equilibrium curve toward which the stream tends to adjust its gradient, digging into its bed and removing material from the upper course and depositing it as the speed drops in the lower. However, this is highly idealized and in practice any number of factors can affect it – differences in rock types in the river bed and the addition of water from tributaries, for example, may produce many irregularities in the hyperbola profile.


The course of a river

Stream beds in their upper sections are often bare rock patchily covered by pebbles. Here the stream has greatest capacity to erode and transport farther downstream all but the largest stones. The valley in the upper course has steep sides and a V-shaped cross-section and most pools, rapids, waterfalls, and potholes occur here, caused by the stream wearing away softer rock more quickly than hard rock. This results in rapids such as the cataracts of the Nile, and where a river flows from a hard bed of rock to a soft one the latter will be eroded away and a waterfall will be formed as a result.

In the middle section most of the irregularities have been worn away, allowing the river to flow freely in a fairly flat channel. The current is just strong enough to carry most of the sediment supplied to it from higher up. It does not erode downward and most of the time runs on its own sediment.

In the lower section the river has a very low gradient, often less than 10 cm per kilometer (2 inches per mile). It flows across a broad floodplain. Where the river is flowing slowly, it cannot moves stones, even in flood, but because it is large it is able to move a huge amount of fine material. The Mississippi carries about 500million tonnes of fine sand and mud past New Orleans each year. The river there meanders over a thick layer of its own sediment.

When the river reaches the sea the sediment it is carrying is deposited. In some areas tidal currents are strong enough to remove it and the river ends in an estuary. Where more sediment is brought down than can be removed by the sea a delta is formed.

A delta is a flat alluvial plain at a river mouth or at the confluence of two rivers, formed of fertile mud deposited by the slowing-moving water (Fig 2). Typically, the stream divides and subdivides until a fan-shaped plain, called an alluvial fan, covered by a complex of channels results. The form of a delta depends of the rates of sedimentation and of erosion by the sea.

An alluvial fan is a generally fan-shaped area of alluvium (water-borne sediment) deposited by a river when it reaches a plain on lower ground, and the speed of flow of the water is abruptly reduced (Fig 3).

Sand, gravel, and silt are the main constituents of the alluvium, with the coarser material deposited near the head of the fan. Organic matter is also transported, making the soil highly fertile. Valuable minerals such as cassiterite (tin ore, SnO2), diamonds, gold, and platinum are often found in alluvial fans.

An estuary is the typically funnel-shaped part of a river near its mouth where fresh- and seawater mix and which is affected by the tides (Fig 4). At ebb tide both tide and river current assist in the erosion of the estuary. Estuaries may also form by local subsidence of the coast. As well as the mouths of rivers, estuaries may include bays, salt marshes, and lagoons. These brackish water ecosystems shelter and feed marine life, birds, and wildlife, but are particularly vulnerable to damage as a result of human actions. Many estuaries provide important harbors.

"Firth" is a term used primarily in Scotland to describe usually a long narrow estuary, often a fjord, and sometimes a strait. The best known are those of the Forth (see Figure 5), Tay, and Clyde; the Solway Firth, into which several rivers drain; the Moray Firth, between the northeast tip of Loch Ness and the North Sea; and the Pentland Firth, the strait between northeast Scotland and the Orkney Islands.

A meander is a naturally-occurring loop-like bend in the course of a river will wind round any obstacle, such as hard rock (Fig 6). Once a meander has been created it will continue, becoming accentuated by the erosive action of the river. On the outside of a bend there will be lateral corrasion, which will gradually work out sideways. On the inside of the bend there is likely to be some deposition, which will build up a flat flood plain. Meanders gradually move downstream. Sometimes they make complete loops, which when cut off, form oxbow lakes. The name comes from the winding River Maeander in Asian Turkey.

An oxbow lake is a crescent-shaped section of a river channel that no longer carries the main discharge of water (Fig 7). An oxbow lake forms from a meander. As sediment is deposited, the meander becomes cut off from the river to create a lake. Once formed, the lake gradually shrinks as silt fills it in; vegetation grows on the new muddy area, and the land can be reclaimed. The name derives from the shape of the lake, said to resemble an ox's collar.


Discharge and speed of a river

Rivers transport sediment as they flow, by the process of traction (rolling), saltation (jumping), suspension (carrying). and solution. A greater discharge increases the amount of sediment that can be transported during flood conditions, but as a river returns to normal flow it deposits sediment. A river adjusts its channel shape to be able to transport sediment most efficiently (Fig 8). This can result in the erosion of a river channel or the building up of floodplains, and sand and gravel banks.

Rivers flood when their channels cannot contain the discharge. Flood risk can be reduced by straightening the channel, dredging sediment or making the channel deeper by raising the banks.

A water gap is a short, narrow gorge cut through a ridge or region of high ground by a stream or river. If the river no longer passes through it, the gorge is termed a wind gap.