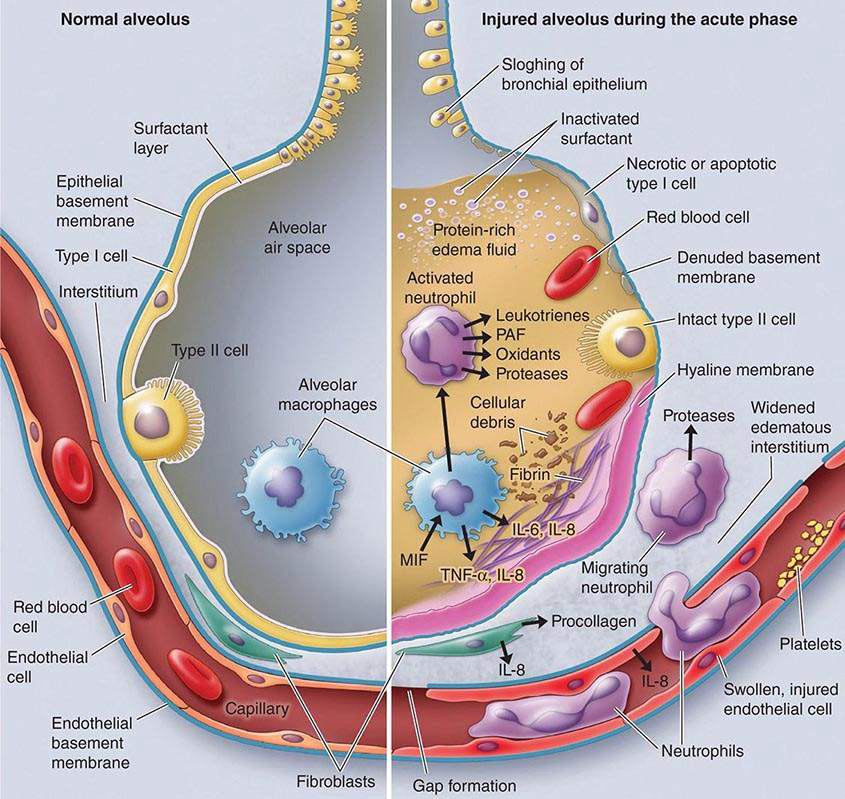 A normal alveolus (left) and a damaged injured alveolus in the acute phase of acute respiratory distress syndrome (right).

Acute respiratory distress syndrome (ARDS) is breathing failure that can occur in critically ill persons with underlying illnesses. It is not a specific disease. Instead, it is a life-threatening condition that occurs when there is severe fluid buildup in both lungs. The fluid buildup prevents the lungs from working properly – that is, allowing the transfer of oxygen from air into the body and carbon dioxide out of the body into the air.

In ARDS, the capillaries (tiny blood vessels) in the alveoli of the lungs are damaged because of an infection, injury, blood loss, or inhalation injury. Fluid leaks from the blood vessels into the alveoli. While some alveoli fill with fluid, others collapse. When this happens, the lungs can no longer fill properly with air and they become stiff. Without air entering the lungs properly, the amount of oxygen in the blood drops. When this happens, the person with ARDS must be given extra oxygen and may need the help of a breathing machine. Breathing failure can occur very quickly after the condition begins. It may take only 1 or 2 days for fluid to build up. The process that causes ARDS may continue for weeks. If scarring occurs, this will make it harder for the lungs to take in oxygen and get rid of carbon dioxide. In the past, only about 4 out of 10 people who developed ARDS survived. But today, with good care in a hospital's intensive or critical care unit, many people (about 7 out of 10) with ARDS survive. Although many people who survive ARDS make a full recovery, some survivors have lasting damage to their lungs.

The causes of acute respiratory distress syndrome (ARDS) are not well understood. It can occur in many situations and in persons with or without a lung disease.

There are two ways that lung injury leading to ARDS can occur: through a direct injury to the lungs, or indirectly when a person is very sick or has a serious bodily injury. However, most sick or badly injured persons do not develop ARDS.

A direct injury to the lungs may result from breathing in harmful substances or an infection in the lungs. Some direct lung injuries that can lead to ARDS include:

It is not clear why some very sick or seriously injured people develop ARDS, and others do not. Researchers are trying to find out why ARDS develops and how to prevent it.

Acute respiratory distress syndrome (ARDS) usually affects people who are being treated for another serious illness or those who have had major injuries. In the United States, it affects about 150,000 people each year. ARDS can occur in people with or without a previous lung disease. People who have a serious accident with a large blood loss are more likely to develop ARDS. However, only a small portion of people who have problems that can lead to ARDS actually develop it.

In most cases, a person who develops ARDS is already in the hospital being treated for other medical problems. Some illnesses or injuries that can lead to ARDS include:

The major signs and symptoms of acute respiratory distress syndrome (ARDS) are:

Doctors and other health care providers watch for these signs and symptoms in patients who have conditions that might lead to ARDS. People who develop ARDS may be too sick to complain about having trouble breathing or other related symptoms. If a patient shows signs of developing ARDS, doctors will do tests to confirm that ARDS is the problem. ARDS is often associated with the failure of other organs and body systems, including the liver, kidneys, and the immune system. Multiple organ failure often leads to death.

Patients with acute respiratory distress syndrome (ARDS) are usually treated in the intensive or critical care unit of a hospital. The main concern in treating ARDS is getting enough oxygen into the blood until the lungs heal enough to work on their own again. The following are important ways that ARDS patients are treated.

With breathing tubes in place, ARDS patients cannot eat or drink as usual. They must be fed through a feeding tube placed through the nose and into the stomach. If this does not work, feeding is done through a vein. Sometimes a special bed or mattress, such as an airbed, is used to help prevent complications such as pneumonia or bedsores. If complications occur, the patient may require treatment for them.

Some people who survive acute respiratory distress syndrome (ARDS) heal quickly and recover completely in a relatively short time. Some are able to have the breathing tube and breathing machine removed in a week or so. Survivors often recover much of their lung function in the first 3–6 months after leaving the hospital, and they continue to recover for up to a year or more.

Others recover more slowly, however. Some ARDS survivors never recover completely, and they have continuing problems with their lungs. Every case is different. People who are younger and healthier when they develop ARDS are more likely to recover quickly than those who are older or who have more health problems. ARDS patients who survive the first week but cannot breathe on their own may have to be on a breathing machine for several weeks or longer. These patients often develop complications, such as infections or air leaks (see the next section on Complications of ARDS). While some of these patients will die, others will get better and be able to breathe on their own again. Their recovery is usually slow, and they may have continuing problems. After leaving the hospital, ARDS survivors need to visit a doctor during recovery to check how well their lungs are doing. Doctors use lung function tests to check the lungs. Spirometry is the most commonly used lung function test. It involves taking a deep breath and blowing hard into a plastic tube. The doctor will also do an oxygen saturation (oximetry) test or a blood test to check the amount of oxygen in the blood. After going home from the hospital, the ARDS survivor may need only a little or a lot of help. While recovering from ARDS at home, a person may:

Anyone who stays in the hospital for a long time can get complications. Common complications in ARDS patients are infections with hospital-acquired bacteria and leaks of air out of the lungs into other body spaces.


For family and friends

While your family member or friend is in the hospital being treated for ARDS, you may feel a lot of stress. One day the patient may seem to be recovering, and the next day things may take a turn for the worse. It can be a scary experience to see someone you care about on a breathing machine.

Several doctors work together to give care to your family member or friend. These doctors are often specialists who are treating different concerns of the patient. For example, an infectious disease specialist might be involved to help make sure that the initial infection or an infectious complication is properly treated. A lung specialist may be adjusting the settings on the breathing machine, and a kidney specialist may be required if kidney failure occurs. These doctors talk to each other regularly to make sure that care is given in a coordinated manner.

There are some things you can do to help, even though you may feel very helpless:

The family members and friends of people who have had ARDS often are deeply affected by the experience. The "roller-coaster ride" of emotions while the ARDS patient is in the hospital is exhausting and stressful. Caring for the ARDS survivor at home can also be stressful and tiring. Ask for help from others or your health care providers if you need it. Most hospitals have individuals such as social workers who can help family members cope with these issues.