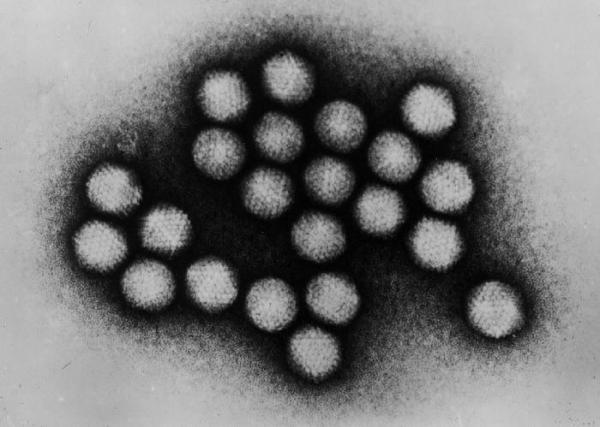 Diagram of an adenovirus virion.

Adenoviruses are medium-sized (90–100 nanometers), nonenveloped icosahedral viruses containing double-stranded DNA. The adenovirus DNA is linear of approximately 36,000 bp wrapped in a histone-like protein and has inverted terminal repeats (ITRs) of 50–200 bp. Both strands of adenovirus DNA encode genes and the genome encodes about thirty proteins. There are 49 immunologically distinct types (6 subgenera: A through F) that can cause human infections. Adenoviruses are unusually stable to chemical or physical agents and adverse pH conditions, allowing for prolonged survival outside of the body.

Although epidemiologic characteristics of the adenoviruses vary by type, all are transmitted by direct contact, fecal-oral transmission, and occasionally waterborne transmission. Some types are capable of establishing persistent asymptomatic infections in tonsils, adenoids, and intestines of infected hosts, and shedding can occur for months or years. Some adenoviruses (e.g., serotypes 1, 2, 5, and 6) have been shown to be endemic in parts of the world where they have been studied, and infection is usually acquired during childhood. Other types cause sporadic infection and occasional outbreaks; for example, epidemic keratoconjunctivitis is associated with adenovirus serotypes 8, 19, and 37. Epidemics of febrile disease with conjunctivitis are associated with waterborne transmission of some adenovirus types, often centering around inadequately chlorinated swimming pools and small lakes. ARDS is most often associated with adenovirus types 4 and 7 in the United States. Enteric adenoviruses 40 and 41 cause gastroenteritis, usually in children. For some adenovirus serotypes, the clinical spectrum of disease associated with infection varies depending on the site of infection; for example, infection with adenovirus 7 acquired by inhalation is associated with severe lower respiratory tract disease, whereas oral transmission of the virus typically causes no or mild disease. Outbreaks of adenovirus-associated respiratory disease have been more common in the late winter, spring, and early summer; however, adenovirus infections can occur throughout the year.

Antigen detection, polymerase chain reaction assay, virus isolation, and serology can be used to identify adenovirus infections. Adenovirus typing is usually accomplished by hemagglutination-inhibition and/or neutralization with type-specific antisera. Since adenovirus can be excreted for prolonged periods, the presence of virus does not necessarily mean it is associated with disease.

Most infections are mild and require no therapy or only symptomatic treatment. Because there is no virus-specific therapy, serious adenovirus illness can be managed only by treating symptoms and complications of the infection.

Vaccines were developed for adenovirus serotypes 4 and 7, but were available only for preventing ARD among military recruits. Strict attention to good infection-control practices is effective for stopping nosocomial outbreaks of adenovirus-associated disease, such as epidemic keratoconjunctivitis. Maintaining adequate levels of chlorination is necessary for preventing swimming pool-associated outbreaks of adenovirus conjunctivitis.