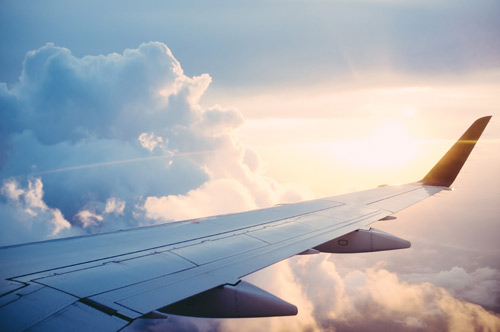 Aeronautics is the study of flight and the control of aircraft involving aerodynamics, aircraft structures, and methods of propulsion. Aeronautics started with the study of balloons, which mainly concerned the raising of a load by means of buoyancy. It later included the heavier-than-air flight of gliders, airplanes, helicopters, and rockets.

A helicopter utilizes lift provided by a rotor (rotating wing). Gliders and planes use wings to provide lift, but a minimum forward speed is essential to maintain height. A plane is pulled forward by a propeller, or is pushed by the reaction forces of hot expanding gases from one or more jet engines or rocket engines. The increased speeds of modern aircraft to supersonic (speeds in excess of that of sound, approximately 1,225 km/h or 760 mph) and the accompanying shock waves this produces has brought about changes in wing and fuselage designs to improve streamlining. While with hypersonic speeds (in excess of five times the speed of sound or Mach 5), the forces involved again change fundamentally requiring further design changes.