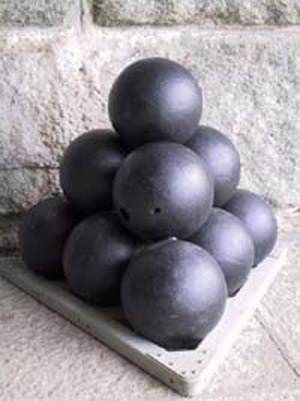 A tetrahedral stack of cannonballs.

and turns out to be k = 24, n = 70, corresponding to 4,900 cannonballs. The ultimate form of the cannonball problem is to ask if there are any other, larger solutions. In 1875, Edouard Lucas conjectured that there weren't and in 1918 G. N. Watson proved that Lucas was right.1

Returning to Elizabethan times, Thomas Harriot's interest in spheres extended far beyond piles of cannonballs. Harriot was an atomist (see atomism), in the classical Greek sense, and believed that understanding how spheres pack together was crucial to understanding how the basic constituents of nature are arranged. Harriot also carried out numerous experiments in optics and was far ahead of his time in this field. So, when, in 1609, Johannes Kepler wanted some advice on how to give his own theories on optics a stronger scientific underpinning who better to turn to than the Englishman? Harriot supplied Kepler with important data on the behavior of light rays passing through glass, but he also stimulated the German's interest in the sphere-packing problem. In response, Kepler published a little booklet titled The Six-Cornered Snowflake (1611) that would influence the science of crystallography for the next two centuries and that contained what has come to be known as Kepler's conjecture about the most efficient way to pack spheres.