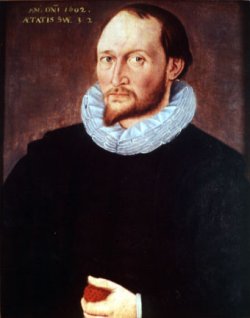 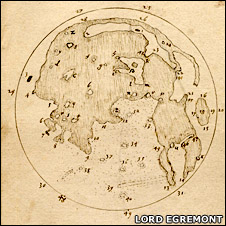 Map of the Moon by Harriot.

Thomas Harriot was an English astronomer, physicist, and mathematician who spent his life under the patronage of wealthy nobles – first (upon graduating from Oxford), Walter Raleigh, and then (starting in 1593), Henry Percy, Earl of Northumberland.

Harriot kept regular correspondence with other scientists and mathematicians, especially in England but also in mainland Europe, notably with Kepler. For unknown reasons, Harriot refrained from publishing most of his scientific work, with the exception of his observations as scientist to Lord Raleigh's 1585 expedition to the New World, published in 1588. He did, however, leave many notebooks of scientific observations, which were only uncovered much later in the late eighteenth century, and not properly studied for another 100 years thereafter.

Harriot's early telescopic observations rival those of Galileo and contemporaries, and it seems that Harriot may have been the first to view the Moon through a telescope, beating out Galileo by a few months. His first drawing of the Moon was made on Jul 26, 1609, whereas Galileo did not achieve this feat until December of the same year. Starting in Jul 1609, Harriot observed the Moon regularly, apparently for the purpose of determining the distance of the Sun using Aristarchus's method, as evidenced by the numerous drawings of the Moon at first and third quarter later found in his notebooks. As a lunar cartographer, Harriot would not be surpassed for another 30 years.

On the basis of surviving historical documents, it appears that Harriot was also the first to observe sunspots, as evidenced by entries in his notebook dated December 8, 1610. (Following the priority dispute with Christoph Scheiner, Galileo claimed that he had been observing sunspots since the summer of 1610, but no direct written evidence has been found to support this claim.) However, Harriot subsequently failed to pay much attention to sunspots until a year later. After reading Galileo's Sidereus Nuncius he also observed the satellites of Jupiter, but as with sunspots Harriot failed to grasp (or at least make note of) the physical significance of his observations.

Throughout his life Harriot pursued extremely original research on the refraction of light, binary mathematics, ballistics, spherical geometry, ciphers and codes, and algebra. He is now credited with independent discovery of the sine law of refraction, first published by René Descartes but earlier discovered, again independently, by Wilbrod Snell. His accurate observations of the 1607 comet were used much later, in 1784, by Friedrich Wilhelm Bessel to compute the comet's orbital elements, which led to the realization that the 1607 comet was in fact Halley's Comet. Harriot died on July 1, 1621 in London.