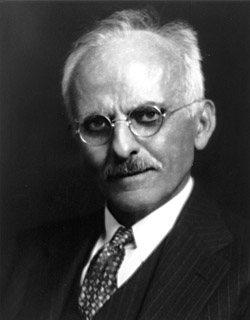 Heber Curtis was an American astronomer who started out as a student and then a professor of Latin and Greek, but went on to play an important role in establishing the nature of external galaxies.

Having earned his PhD in astronomy (1902) from the University of Virginia, Curtis joined the staff of the Lick Observatory where he remained until 1920. He then became director of the University of Pittsburgh's Allegheny Observatory and, finally, in 1930, was appointed director of the University of Michigan's observatory. His early work involving measuring the radial velocities of stars. In 1910, however, he began investigating spiral nebulae and became convinced that they were independent star systems. In 1917 he argued that the observed brightness of novae, found by him and by George Ritchey on photographs of spiral nebulae, indicated that the nebulae lay well beyond our Galaxy. He also maintained that extremely bright novae, later identified as supernovae, could not be included with the novae as distance indicators. He estimated the Andromeda Nebula (now known as the Andromeda Galaxy) to be 500,000 light-years away, a view opposed by many, including Harlow Shapley who proposed that the Milky Way Galaxy was 300,000 light-years in diameter – far larger than previously assumed – and that the spiral nebulae lay within it. In 1920, at a meeting of the National Academy of Sciences, Curtis engaged in a famous debate with Shapley over the size of the Galaxy and the distance of the spiral nebulae. The matter lay unresolved, however, until 1924 when Edwin Hubble redetermined the distance of the Andromeda Nebula and demonstrated that it was a galaxy in its own right.