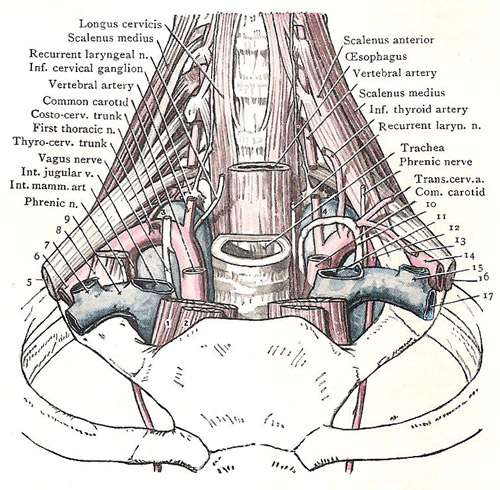 The cervical pleura is that part of the pleura (pleural sac) in the region of the neck.

On each side, the cervical pleura bilges upward from the apex of the lung to the root of the neck. Its height, with reference to the first pair of costal arches, varies in different subjects. In some, it extends upward for about 5 cm (2 in) above the sternal end of the first rib; in others, for not more than 2.5 cm. The differences depend on the obliquity of the thoracic inlet. Posteriorly, the apex of the pleura is usually at the level of the neck of the first rib. It forms a dome-like roof for each side of the thoracic cavity, and is strengthened by a fascial expansion called the suprapleural membrane. This membrane springs from the seventh cervical transverse process, and spreads over the pleura like a fan to be attached to the inner margin of the first rib.

The cervical pleura is in relation with numerous important structure.

The scaleus anterior covers the anterolateral part of the dome of the pleura, separating it from the subclavian vein, which ends at the medial border of the muscle. Immediately above the vein, the subclavian artery crosses the dome below its summit, and the vertebral artery ascends over it from the subclavian. The internal mammary artery descends from the subclavian, passes behind the innominate vein, and, on the right side, is crossed, as it lies behind the vein, by the phrenic nerve, which passes usually in front of the artery, but sometimes behind it. The costocervical trunk arches backwards from the subclavian and crosses the summit of the dome; its superior intercostal branch descends behind the dome, between the first intercostal nerve on the lateral side and the first thoracic sympathetic ganglion on the medial side. The vagus nerve descends in front of the medial part of the subclavian artery; on the right side, its recurrent laryngeal branch turns round the lower border of the artery, and the ansa subclavia lies to the lateral side of the recurrent nerve.