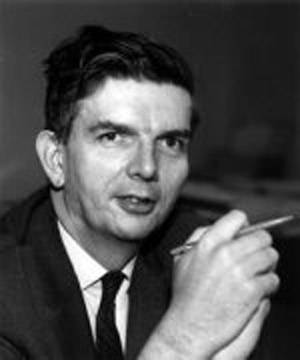 Robert Dicke was an American physicist who established the importance of the measurements of Arno Penzias and Robert Wilson in terms of the cosmic microwave background. In 1964, unaware that he was repeating a line of thought pursued earlier by George Gamow, Ralph Alpher, and Robert C. Herman in 1948, Dicke began to think about the consequences of a Big Bang origin of the universe. He deduced that the glow of the primordial fireball in which the universe was born ought today to be still visible as feeble blackbody radiation coming from all parts of the sky. At Dicke's instigation, his colleague P. James Peebles calculated that this remnant radiation should now have a temperature of about 10 K, later corrected to about 3 K. At this temperature a blackbody should radiate a weak signal at microwave wavelengths from 0.05 mm to 50 cm with a peak at about 2 mm; further, the signal should be constant throughout the universe. Dicke started to organize a search for such radiation and had begun to install an antenna on his laboratory roof when he heard from Penzias and Wilson that they had detected background microwave radiation at a wavelength of 7 cm. It was this confluence of theory, calculation, and observation that helped establish the Big Bang theory.

Dicke graduated in 1939 from Princeton University and obtained a PhD in 1941 from the University of Rochester. He spent the war at the radiation laboratory of the Massachusetts Institute of Technology, joining the Princeton faculty in 1946. In 1957 he was appointed professor of physics and served from 1975 to 1984 as Albert Einstein Professor of Science. In 1984 he was appointed Albert Einstein Emeritus Professor of Science.