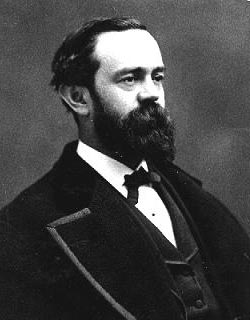 Henry Draper was an American pioneer of astronomical spectroscopy. He made the first photograph of the spectrum of a star (Vega), in 1872, was the first to photograph a nebula (the Orion Nebula), in 1880, and established the observing techniques and program for the work – the Henry Draper Catalogue – that would bear his name when published, seven years after his early death (see below).

The son of John William Draper, Henry trained to be a medical doctor but, because he completed all of his medical courses at New York University by the age of 20, he traveled in Europe for a year until he was old enough to graduate. In Ireland he visited, and was greatly influenced by, the Third Earl of Rosse, William Parson. Subsequently, he wove his interests in telescope-making and photography, developed during his travels, into his professional career. When he returned from Europe, Draper began preparing his own glass mirror, which he installed in his new observatory on his father's estate at Hastings on Hudson, New York. He started his astronomical research career by making preliminary studies of the spectra of the more common elements and photographing the solar spectrum. By 1873 he had produced a spectrograph that was similar to the visual spectroscope of William Huggins; he clarified the spectral lines by using a slit and incorporating a reference spectra so that elements could be identified more easily. The spectroscopic studies of Huggins and Norman Lockyer in Europe stimulated Draper's research and during the last years of his life he worked toward acquiring high quality spectra of celestial objects. After his untimely death, from pleurisy, his widow established a fund to further support a spectral studies program. In 1886 a team at Harvard College Observatory began the program to establish a useful classification scheme for stars and a catalogue of spectra. The Harvard project, named the Henry Draper Catalogue, completed in 1897, resulted in the first comprehensive classification of stars according to their spectra.

The Henry Draper Catalogue (HD) is a catalogue of the spectral types and positions of 225,300 stars, down to about magnitude 8, compiled by Annie Jump Cannon and her coworkers at Harvard College Observatory between 1918 and 1924 and named in honor of Henry Draper, whose widow donated the money needed to finance it. HD numbers are widely used today, especially for stars that have no Bayer designation or Flamsteed number. Stars numbered 1 to 225300 are from the original catalogue and are numbered in order of right ascension for 1900.0. Stars in the range 225301 to 359083 are from the Henry Draper Extension (HDE), published in 1925–1936 and 1949. The notation HDE is used only for stars in this extension, but even these are usually denoted HD as the numbering ensures there can be no ambiguity.