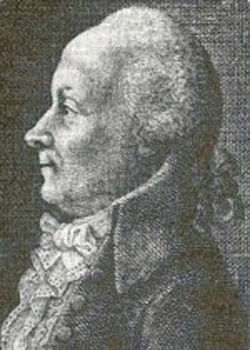 David and Johannes Fabricius were German father and son astronomers. David was a Lutheran pastor in Osteel, East Frisia (northwest Germany), who corresponded with Johannes Kepler and discovered the first known variable star (Mira) in 1596. Johannes was one of the first to observe sunspots and hence report the rotation of the Sun.

Early in 1611, Johannes, then at university, returned from the Netherlands with a telescope. On March 9, Johannes turned the telescope at the rising Sun and saw several dark spots on it. He and his father continuing making solar observations, quickly switching, however, to the projection method by means of a camera obscura. Over the next several months they tracked spots as they moved across the Sun's face and found that, a dozen or so days after they had disappeared from the western edge of the Sun, they reappeared on the eastern edge. In a tract dedicated Jun 1611, Johannes wrote on sunspots, De Maculis in Sole Observatis, et Apparente earum cum Sole Conversione Narratio (Narration on Spots Observed on the Sun and their Apparent Rotation with the Sun), giving his opinion that they were on the Sun and that the Sun therefore probably rotated on its axis (a notion already suggested by Giordano Bruno and Kepler). Because of the lack of a powerful patron who might have publicized the book, it drew little attention, and by the time Kepler became aware of its existence it was eclipsed by Christoph Scheiner's first publication on sunspots (January 1612). Johannes's diffidence may have been caused by a disagreement with his father about the nature of sunspots. In December 1611, David Fabricius wrote to Michael Maestlin (Kepler's old teacher) that he didn't believe the spots were on the Sun's body, though the center of their motions clearly lay in the Sun.

Little else is known about Johannes Fabricius, except that he died at the age of 29. A year later his father was killed when an irate peasant, whom he had accused of stealing a goose, hit him over the head with a shovel.