Fig 1. Ants exchange chemical signals by touching each other's bodies with their antennae and forelegs. 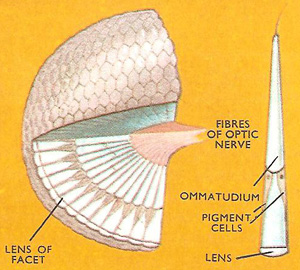 Fig 3. The compound eye of an insect cut away to show the arrangement of the units or ommatidia and the nerve supply. (Inset) A single ommatidium seen in lengthwise section. 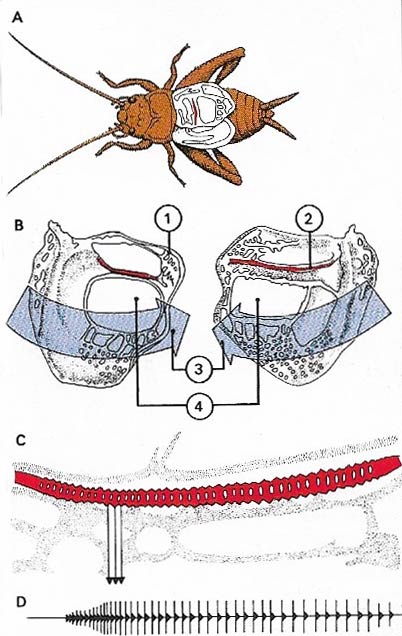 Fig 5. Signalling sounds are produced by many insects and in the order Orthoptera, which includes the grasshoppers, locusts and crickets, this is well developed in males and well known. Sounds are made by stridulation in which vibration is set up by the scraping of one hard surface against another. In crickets (A) the forewings or tegmina are specially modified for this purpose (B), for each bears a scraper (1) and a file (2). When the wings are rubbed together (3) vibrations are set up which produce sounds. Individual variations are created by the 'mirrors' (4). The vibrations of each tooth (C) produces sound of a particular frequency as in the graph (D). 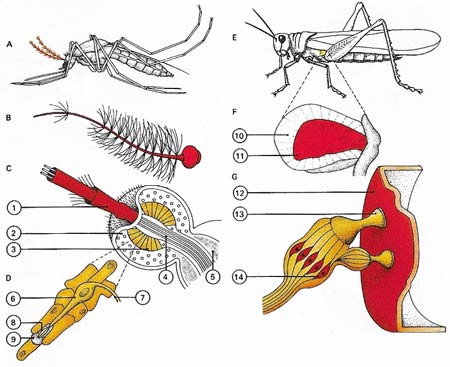 Fig 6. Insects have receptors for detecting sound waves. Mosquitoes (A) detect sound velocity with their antennae (B). At the base of the antennal shaft (1) is Johnston's organ (C) containing sound receptor cells (3) and their nuclei (2). These send impulses via nerve fibres (5) to the "brain" where they are interpreted as sounds. Blood vessels and nerves pass through the organ (4). Each receptor unit (D) contains a sensory cell (6) with a nerve fibre (7) and a sensory hair (8) with a protective cap (9). The sound receptors of the abdomens of grasshoppers (E) respond to changes in the air pressure. They consist (F) of a rigid frame (10) supporting a tympanum (11) like that of a human ear. In detail (G) the tympanic membrane (12) carries a supporting process (13) for sensory units formed as in (D). The nuclei of the sensory cells (14) give off nerve fibres to the brain.

Insects, like ourselves, are responsive to many stimuli in their surroundings, such as light, heat, touch, chemicals, and vibrations. They have a variety of receptors which, when stimulated, pass information in the form of nervous signals to the central nervous system of the insect. The number of signals that are sent will depend on how strongly the receptor is stimulated and for how long, and the actions of the insect will vary accordingly.

The bodies of insects are covered with sensitive hairs. These are most numerous and most sensitive on parts such as the antennae (feelers) and on the lower sections of the legs (Fig 1).

Each hair is a stiff modified part of the cuticle and/or the underlying skin to which it is jointed. A sense cell beneath the joint is supplied with a nerve fiber and, when the hair is touched, the mechanical disturbance of the associated sense cell or the resulting chemical changes causes signals to pass along its nerve and the insect "feels" (see Figure 2). (Some of the hairs may be moved by sound waves — this will be discussed under hearing, below).

If a person is blindfolded and asked to retrieve an object at the far side of a room he or she will grope about using their hands to "feel" their way across the room. In doing this he or she is acting very much in the way that an insect does: for the insect waves its antennae about, relying more on touch than we do, and less on sight.

Besides the sensitive hairs insects have other sense organs. These are modified dome-shaped patches of cuticle which, like hairs are associated with a sense cell and its nerve. They occur on the tail spines (cerci), the wings, and the lower parts of the limbs. Stresses in the cuticle move the dome, which disturbs the sense cell.

There appears to be a direct link between the control of flying and the touch receptors in the lower sections of the legs, because many insects commence flying as soon as the weight is taken off the limbs. Presumably these limb receptors are stimulated continuously while the insect is standing, and the succession of signals passing to the central nervous system overrules the nerves supplying the wings. The insect flies when these signals stop or when the higher centers overrule them.

The receptors for these senses are concerned with the detection of chemical substances and are called chemoreceptors. Because of this relationship between the two senses it is often difficult to say definitely which is used in a particular instance. A rough distinction is that smell detects chemicals which exist in the air as vapor, while taste recognizes liquids or solids which come into contact with the receptors.

Receptors of chemicals seem to occur on all parts of the body. All have one thing in common: they have a thin cuticle and are supplied with one or more bipolar nerve cells. Those for smell are concentrated on the palps and antennae in the honeybee (see bee).

The sense of smell is used for various purposes – sexual attraction, recognizing the odor of their own species, finding suitable sites in which to lay eggs, and finding food. The males of certain moths are attracted by the scent of virgin females, for example. Some moths are able to scent their mates at a distance of three km (two miles). Certainly social insects are able to detect members of their own species, even of their own colony. Often an ant of the same species but from another colony will invade the home of a neighboring colony. It will be recognized as foreign because its different smell can be detected and so will be evicted or killed. Some ants will follow trails left by others and so they are guided on their food-foraging expeditions.

Female insects are often attracted to a suitable site in which to lay their eggs by its smell. Parasitic forms (see parasite also find their hosts in this way. Plant-eating insects are often attracted to the plants on which they feed by the odors that these emit. In this way night-flying moths are guided to such flowers as honeysuckle. Many drably-colored flowers attract flies because of their fetid smell. Such features play an important part in helping to ensure that pollination is carried out. It is interesting that the newly emerged females of an ichneumon fly find the scent of the pine unattractive and fly away from it. When they are sexually mature, however, the scent attracts them and they fly back to it to lay their eggs on the host insects that they parasitize. By offering substances which to us taste bitter, sweet, salt, or acid (sour) it is possible to study an insect's sense of taste. Bees are particularly fond of sweet substances such as some sugars, but on the other hand they will reject many sugars to which flies are attracted. Honeybees also find man-made sweetening substances such as saccharin distasteful.

The taste receptors occur mainly in the mouth and on the mouthparts, the antennae, and the lower parts of the legs of many insects. Insects can literally taste with their feet!

Often on a hot day one is aware that it is also muggy. Insects, too, are receptive to both humidity and temperature. It is probable that the receptors in the human body louse, Pediculus, are tufts of specialized hairs, and hairs of various kinds are thought to be humidity receptors. At present it is not known if the receptors are stimulated by changes in the suppleness of the cuticle or whether they are directly receptive to water vapor.

Very few heat receptors have been identified positively. Some blood-sucking insects (e.g., mosquitoes) are known to locate warm-blooded prey by detecting the heat that their bodies produce though the receptors have not been isolated.

Light visible to ourselves lies between red and violet, but though many insects are not so sensitive to the red end of the spectrum they can see well into the ultraviolet which we are unable to see. Honeybees are even able to perceive the plane of vibration of polarized light, which faculty they are able to use as a means of direction-finding.

Insects respond to light in three ways: through the whole of the body surface which appears to be sensitive, through simple eyes called ocelli, and through compound eyes.

In many simple animals the body is receptive to light even though no obvious eyes are present. Simple eyes occur on the head near the compound eyes, usually in a group of three. They have no focusing mechanism. (Many insects have no simple eyes.) Simple eyes probably measure the light intensity, and in some insects, at any rate, prepare the compound eyes for receiving light, thus alerting the insect.

Compound eyes (Fig 3) are the main organs of sight. The outer part of each eye consists of numerous units or facets varying in number from about ten to thirty thousand in different insects. They are usually hexagonal, forming a honeycomb-like mosaic. Each facet or lens is at the top of a cone-shaped tube (ommatidium) at the bottom of which are the light receptive cells. All the ommatidia together produce a mosaic of spots of light, each spot representing the part of the field of view in line with a particular ommatidium. In effect each picture consists of a series of dots – rather like a printed picture in a newspaper. The picture an insect sees, however, is indistinct. Insects can certainly distinguish shapes and can recognize certain patterns, but their eyes are best suited to pick out moving objects or those moving across their flight path. A dragonfly is an expert, for example, at catching its prey on the wing. In most insects the field of view of both compound eyes overlap so that they have stereoscopic vision somewhat like our own.

Many insects can distinguish colors. Karl von Frisch was a pioneer in experiments on this. He placed a dish of sugar on the blue-colored board of a colored strip. The bees came to the dish and fed. When the dish was removed the bees still went to the blue color where the dish had been. To show that they were in fact "seeing" the strips in color and not merely as different shades of gray he placed several dishes on a checkered board, each square having a different intensity of gray except one which was blue. The bees went for the blue color that they had learned to visit in the first place.

This sense is not equally developed in all insects. In fact it is likely that some insects are deaf. The ranges of hearing of different insects cover a wider frequency band than that to which the human ear is sensitive.

The purpose of the insect's hearing organs seem to be the location of the other sex for mating purposes. Crickets and the like chirp or stridulate, and researchers have succeeded in attracting unmated female crickets to a loudspeaker from which noises made by young males were coming.