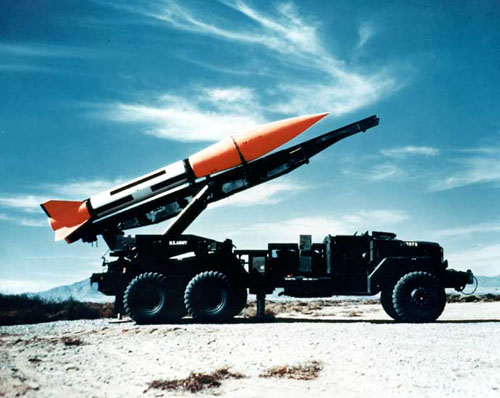 A missile is an unmanned aerial weapon of which there are two basic types, the ballistic missile and the guided missile. In modern usage the term most often describes the self-propelled, guided weapons developed during or since World War II. (See guided missiles, postwar development.)

The first rocket missiles were used by the Chinese in the thirteenth century (see Chinese fire-arrows), but the ancestor of the modern missile were the German V-1 and V-2 rockets used to bombard London in World War II. The V-2 could reach 5,600 kilometers per hour and there was no defense against it. Captured V-2s gave Russia and the United States (see Operation Paperclip) the starting point for further rocket development culminating in intercontinental missiles capable of delivering nuclear warheads to any point on the globe – and also of launching mankind into space.

Missiles can be classified according to their range, by the way they approach their target (guided, unguided, or ballistic), by their use (surface-to-surface, surface-to-air, and so on), or by their target (as with antitank missiles). The Minuteman, for instance, is an intercontinental ballistic missile (ICBM), with a range of more than 11,000 km and a ballistic arc trajectory, like a shell fired from a gun.

Missiles are normally propelled by solid-fueled rockets equipped with an oxidizer that allows the fuel to burn outside the atmosphere. Liquid propellants are more volatile and not generally used. Larger missiles, such as the Minuteman, comprise several stages, generally mounted on one another, each with its own motor. This arrangement gives the missile increased speed, range, and lifting capacity and so is generally also used in spacecraft-launching missiles such as Atlas or Saturn. A few missiles, such as the Hound Dog air-to-surface missile carried by the B-52 bomber, are powered by jets, while Britain's Bloodhound is driven by a ramjet.

Guidance systems vary from wire guidance for short-range missiles to elaborate homing systems which eliminate almost all possibility of escape. Some short-range missiles such as Honest John need no guidance at all, while those equipped with nuclear warheads cause such widespread destruction that pinpoint accuracy is not required. Wire guidance allows the operator to control the course of the missile through two fine wires paid out behind it. Other more complex systems use a radio beam directed at the target, or a radar or laser-fed computer tracking and correcting the missile's course. Homing systems involve devices which detect waves emitted by or reflected from the target. Some home on heat in the form of infrared rays; others use radar. Many can be jammed electronically, but some are preset with a complete flight plan to guide the missile to a selected target, and to correct any deviation from course. Most long-range missiles have an inertial guidance system to detect changes in course and velocity.

Missile launchers range from the simple tube of the bazooka to the massive self-propelled mobile launcher/transporter used for Honest John. Larger missiles such as ICBMs require so much elaborate support equipment that they must be stored in heavily defended underground silos. Nuclear-powered missile submarines are more difficult to detect and destroy. Aircraft-launched missiles usually have a guidance system enabling the aircraft to remain a considerable distance from the target. The expense and risks involved in the uncontrolled development of nuclear missiles and antimissile systems led to Strategic Arms Limitations Talks (SALT) between the United States and Russia.