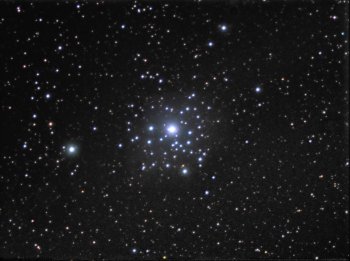 NGC 2362, also known as the Tau Canis Majoris cluster, is an open cluster in the constellation Canis Major. It may be less than 5 million years old1 and is still associated with nebulosity – the remains of the gas cloud from which it formed. NGC 2362 contains about 60 stars and has a total mass of at least 500 solar masses. The brightest star in the cluster is the O star Tau Canis Majoris, a luminous supergiant of spectral type O8, visual magnitude 4.39, and absolute magnitude -7 (equivalent to about 50,000 solar luminosities). As Tau CMa is the brighter component of a spectroscopic binary, its mass has been quite well determined at 40 to 50 solar masses. Dynamical studies of NGC 2362 suggest that it will survive longer before breaking up than will the Pleiades but not as long as the Hyades.

NGC 2362 was first seen by Giovanni Hodierna in 1654 and rediscovered William Herschel in 1783.