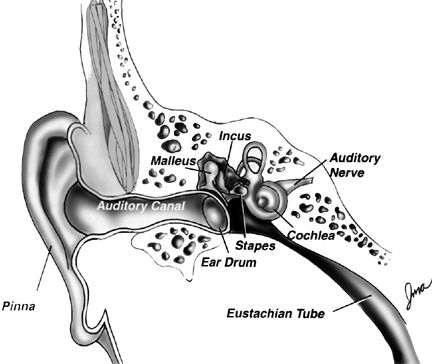 The biliary system showing sites at which gallstones may become impacted.

Seventy-five percent of children experience at least one episode of otitis media by their third birthday. Almost half of these children will have three or more ear infections during their first 3 years. Although otitis media is primarily a disease of infants and young children, it can also affect adults.

There are many reasons why children are more likely to suffer from otitis media than adults. First, children have more trouble fighting infections. This is because their immune systems are still developing. Another reason has to do with the child's eustachian tube. The eustachian tube is a small passageway that connects the upper part of the throat to the middle ear. It is shorter and straighter in the child than in the adult. It can contribute to otitis media in several ways.

One more factor that makes children more susceptible to otitis media is that adenoids in children are larger than they are in adults. Adenoids are composed largely of cells (lymphocytes) that help fight infections. They are positioned in the back of the upper part of the throat near the eustachian tubes. Enlarged adenoids can, because of their size, interfere with the eustachian tube opening. In addition, adenoids may themselves become infected, and the infection may spread into the eustachian tubes.

Bacteria reach the middle ear through the lining or the passageway of the eustachian tube and can then produce infection, which causes swelling of the lining of the middle ear, blocking of the eustachian tube, and migration of white cells from the bloodstream to help fight the infection. In this process the white cells accumulate, often killing bacteria and dying themselves, leading to the formation of pus, a thick yellowish-white fluid in the middle ear. As the fluid increases, the child may have trouble hearing because the eardrum and middle ear bones are unable to move as freely as they should. As the infection worsens, many children also experience severe ear pain. Too much fluid in the ear can put pressure on the eardrum and eventually tear it.

Otitis media not only causes severe pain but may result in serious complications if it is not treated. An untreated infection can travel from the middle ear to the nearby parts of the head, including the brain. Although the hearing loss caused by otitis media is usually temporary, untreated otitis media may lead to permanent hearing impairment. Persistent fluid in the middle ear and chronic otitis media can reduce a child's hearing at a time that is critical for speech and language development. Children who have early hearing impairment from frequent ear infections are likely to have speech and language disabilities.


how someone can tell if a child has otitis media

Otitis media is often difficult to detect because most children affected by this disorder do not yet have sufficient speech and language skills to tell someone what is bothering them. Common signs to look for are


can otitis media be prevented

Specific prevention strategies applicable to all infants and children such as immunization against viral respiratory infections or specifically against the bacteria that cause otitis media are not currently available. Nevertheless, it is known that children who are cared for in group settings, as well as children who live with adults who smoke cigarettes, have more ear infections. Therefore, a child who is prone to otitis media should avoid contact with sick playmates and environmental tobacco smoke. Infants who nurse from a bottle while lying down also appear to develop otitis media more frequently. Children who have been breast-fed often have fewer episodes of otitis media. Research has shown that cold and allergy medications such as antihistamines and decongestants are not helpful in preventing ear infections. The best hope for avoiding ear infections is the development of vaccines against the bacteria that most often cause otitis media. Scientists are currently developing vaccines that show promise in preventing otitis media. Additional clinical research must be completed to ensure their effectiveness and safety.

The simplest way to detect an active infection in the middle ear is to look in the child's ear with an otoscope, a light instrument that allows the physician to examine the outer ear and the eardrum. Inflammation of the eardrum indicates an infection. There are several ways that a physician checks for middle ear fluid. The use of a special type of otoscope called a pneumatic otoscope allows the physician to blow a puff of air onto the eardrum to test eardrum movement. (An eardrum with fluid behind it does not move as well as an eardrum with air behind it.)

A useful test of middle ear function is called tympanometry. This test requires insertion of a small soft plug into the opening of the child's ear canal. The plug contains a speaker, a microphone, and a device that is able to change the air pressure in the ear canal, allowing for several measures of the middle ear. The child feels air pressure changes in the ear or hears a few brief tones. While this test provides information on the condition of the middle ear, it does not determine how well the child hears. A physician may suggest a hearing test for a child who has frequent ear infections to determine the extent of hearing loss. The hearing test is usually performed by an audiologist, a person who is specially trained to measure hearing.

Many physicians recommend the use of an antibiotic (a drug that kills bacteria) when there is an active middle ear infection. If a child is experiencing pain, the physician may also recommend a pain reliever. Following the physician's instructions is very important. Once started, the antibiotic should be taken until it is finished. Most physicians will have the child return for a follow-up examination to see if the infection has cleared.

Once the infection clears, fluid may remain in the middle ear for several months. Middle ear fluid that is not infected often disappears after 3 to 6 weeks. Neither antihistamines nor decongestants are recommended as helpful in the treatment of otitis media at any stage in the disease process. Sometimes physicians will treat the child with an antibiotic to hasten the elimination of the fluid. If the fluid persists for more than 3 months and is associated with a loss of hearing, many physicians suggest the insertion of "tubes" in the affected ears. This operation, called a myringotomy, can usually be done on an outpatient basis by a surgeon, who is usually an otolaryngologist (a physician who specializes in the ears, nose, and throat). While the child is asleep under general anesthesia, the surgeon makes a small opening in the child's eardrum. A small metal or plastic tube is placed into the opening in the eardrum. The tube ventilates the middle ear and helps keep the air pressure in the middle ear equal to the air pressure in the environment. The tube normally stays in the eardrum for 6 to 12 months, after which time it usually comes out spontaneously. If a child has enlarged or infected adenoids, the surgeon may recommend removal of the adenoids at the same time the ear tubes are inserted. Removal of the adenoids has been shown to reduce episodes of otitis media in some children, but not those who are under 4 years of age. Research, however, has shown that removal of a child's tonsils does not reduce occurrences of otitis media. Tonsillotomy and adenoidectomy may be appropriate for reasons other than middle ear fluid.

Hearing should be fully restored once the fluid is removed. Some children may need to have the operation again if the otitis media returns after the tubes come out. While the tubes are in place, water should be kept out of the ears. Many physicians recommend that a child with tubes wear special ear plugs while swimming or bathing so that water does not enter the middle ear.

Several avenues of research are being explored to further improve the prevention, diagnosis, and treatment of otitis media. For example, research is better defining those children who are at high risk for developing otitis media and conditions that predispose certain individuals to middle ear infections. Emphasis is being placed on discovering the reasons why some children have more ear infections than other children. The effects of otitis media on children's speech and language development are important areas of study, as is research to develop more accurate methods to help physicians detect middle ear infections. How the defense molecules and cells involved with immunity respond to bacteria and viruses that often lead to otitis media is also under investigation. Scientists are evaluating the success of certain drugs currently being used for the treatment of otitis media and are examining new drugs that may be more effective, easier to administer, and better at preventing new infections. Most important, research is leading to the availability of vaccines that will prevent otitis media.