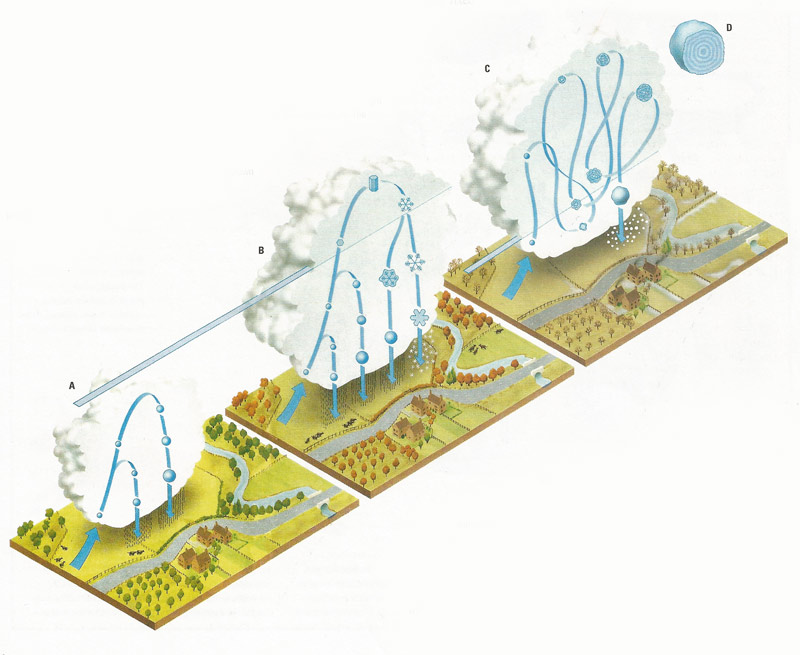 Fig 1. Shallow clouds and those in the tropics do not reach freezing level, so ice crystals don't form (A). Instead, a larger-than-average cloud droplet may coalesce with several million other cloud droplets to reach raindrop size. Electrical charges may encourage coalescence if droplets have opposite charges. Some raindrops then break apart to produce other droplets in a chain reaction, which produces an avalanche of raindrops. Most rainfall in the mid-latitudes is the result of snowflakes melting as they fall (B). It takes many millions of droplets and ice crystals to make a single raindrop or snowflake heavy enough to fall from a cloud. Yet a snowflake can be grown from ice crystals in only 20 min. Large hailstones need strong upcurrents of air in order to form (C). A 30 mm (1.2 in) diameter hailstone probably needs an updraft of 100 km/h (60 mph). The turbulent air currents in a thunderstorm turn a frozen water droplet into an embryonic hailstone. The abundant supercooled moisture droplets in a storm will readily freeze on to its surface. It is swept up and down by the currents and accumulates numerous layers of thick ice, which are alternately clear and milky. The opaque layer is made when air bubbles and sometimes ice crystals are trapped during rapid freezing in the cloud's cold upper levels. The clear layers form in the cloud's warmer, lower levels, where water freezes slowly. There can be as many as 25 layers in a hailstone (D) and the last –a clear layer of ice, which is often the thickest – develops as the hailstone falls through the wet, warm cloud base. 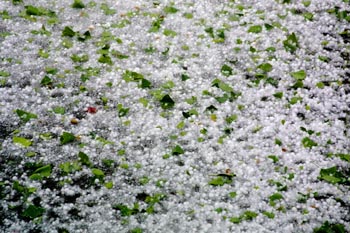 Fig 2. Hailstones on the ground. 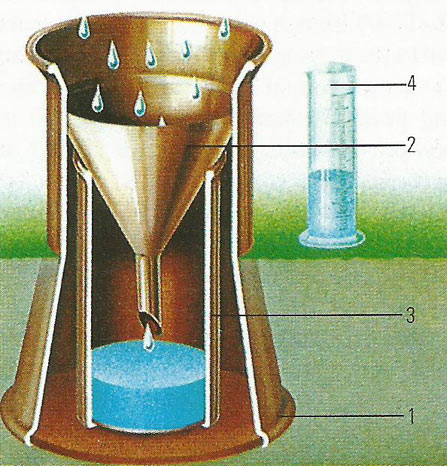 Fig 3. The example of a rain gauge illustrated is designed for daily measurement of total rainfall. The outer case (1) is shaped to provide extra stability when the gauge is embedded in the soil. The gauge is essentially a funnel (2) of standard diameter to direct the rain to the inner can (3). The rainwater collected is poured into a special measuring cylinder (4) graduated to read millimeters of rainfall. 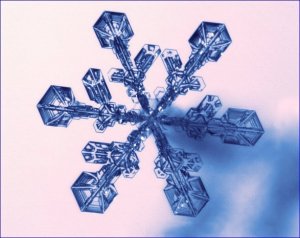 Fig 4. A snowflake, showing the characteristic hexagonal arrangements of the crystal.

In meteorology, precipitation includes any water particles that fall from clouds to the ground, including rain and drizzle, snow, sleet, and hail. Precipitation is important in the water cycle.

Precipitation is distinguished from cloud, fog, dew, and frost, in that it must fall and reach the ground. Measured by rain and snow gauges, the amount of precipitation is expressed in millimeters or inches of water depth.

Precipitation occurs with the condensation of water vapor in clouds into water droplets that coalesce into drops as large as 7 mm (0.25 in) in diameter. It also forms from melting ice crystals in the clouds. Drizzle consists of fine droplets, and snow of masses of many-sided ice crystals. Sleet is formed when raindrops freeze into small ice pellets, and hail when concentric layers of ice in cumulonimbus clouds freeze, forming lumps measuring from 0.5–10 cm (0.2–4 in) in diameter (Fig 1).

Hail is precipitation of pellets of ice, often associated with thunderstorms (Fig 2). Hailstones have diameters of 2–250 mm, 2–5 mm being most common. They require a strong updraft, raising them to colder regions, to form. Often this happens several times, the hailstone collecting a new layer of ice each time it rises, until it is too heavy to support and falls to the ground. Larger hailstones may have alternate layers of clear and white ice, due to different rates of freezing.

Rain is water drops falling through the atmosphere. It is the chief form of precipitation. Raindrops range in size up to 4 mm diameter; if they are smaller than 0.5 mm the rain is called drizzle. The quantity of rainfall (independent of the drop size) is measured by a rain gauge, an open-top vessel which collects the rain, calibrated in millimeters or inches and so giving a reading independent of the area on which the rain falls. Light rain is less than 25 mm per hr, moderate rain 25 to 75 mm per hr, and heavy rain more than 75 mm per hr. Rain may result from the melting of snow or hail as it falls, but is commonly formed by direct condensation.

When a parcel of warm air rises, it expands approximately adiabatically, cooling about 1K per 100 m. Thus its relative humidity rises until when it reaches saturation the the water vapor begins to condense as droplets, forming clouds. These droplets may coalesce into raindrops, chiefly through turbulence and nucleation by ice particles or by cloud seeding. Most air may be lift by convection, producing convective rainfall; by forced ascent of air as it crosses a mountain range, producing orographic rainfall; and by the forces within cyclones, producing cyclonic rainfall.

A rain gauge is an instrument for measuring rainfall and other forms of precipitation (Fig 3). There are many different types, including some self-recording varieties. Most rain gauges consist f a cylinder that stands up above the ground surface to prevent splashing water bouncing in. Inside the cylinder, there is a funnel to lead the water into a collecting jar. The water collected is poured into a measuring cylinder, and the total rainfall can be measured, generally in millimeters, or inches.

An isohyet is a line on a weather map connecting points with equal rainfall. Isohyets are usually drawn for a particular period of time, to show the distribution of rainfall over a few months in the summer or winter, or perhaps for a whole year.

Snow is precipitation consisting of flakes or clumps of ice crystals. The crystals are plane hexagonal, showing an infinite variety of beautiful branched forms; needles, columns, and irregular forms are also found. Snow forms by direct vapor-to-ice condensation from humid air below 0°C. On reaching the ground, snow crystals lose their structure and become granular. Fresh snow is very light (specific gravity about 0.1), and is a good insulator, protecting underlying plants from severe cold. In time, pressure, sublimation and melting and refreezing lead to compaction into névé.

A blizzard is a snowstorm in which wind velocity reaches 14 m/s (32 mph) or more, the temperature is below freezing, and visibility poor. Blizzards are common in polar regions.

Névé is compacted snow that lasts from year to year, representing one of the earliest stages in the development of a glacier. Further compaction, until there is no air left in the snow, results in the formation of firn.

It is often said that no two snowflakes are alike (Fig 4). While this is hard to prove, individual samples can be captured on a chilled glass microscope slide and preserved with artist's spray fixative. All are six-sided and the more ornate kind, called dendritic snowflakes, form when the air temperature is between -12°C to -16°C (10°F and 3°F). Typical snowflakes fall at a rate of a meter or two per second; assuming 1.5 meters per second and a cloud base of 3,000 m (roughly the height of nimbostratus clouds) gives a descent time of 20 min.

Snow blindness is temporary loss of vision with severe pain, tears, and edema due to excessive ultraviolet light reflected from snow. Permanent damage is rare but protective Polaroid glasses should be used.

A snowmobile, or motor sled, is a motorized vehicle with two skis in front and propelled by an endless track, used for traveling over deep snow. First developed in the 1920s to replace dogsleds, they have become popular for recreation and racing since lightweight models were introduced (1959).

A snowshoe is a broad, light footwear (about 1 m × 0.4 m) consisting of a wooden frame, laced with leather, strapped to the shod foot. Spreading the wearer's weight over a large area, they enable him to walk on deep, soft snow. Snowshoe racing is a popular sport, speeds of about 1 kilometers in 3 min being attainable.

One of the great urban legends is that the Inuit have n words for "snow," where n is a large number. This story may have started in 1911 when anthropologist Franz Boaz casually mentioned that the Inuit – he called them "Eskimos," using the derogatory term of a tribe to the south of them for eaters of raw meat – had four different words for snow. With each succeeding reference in textbooks and the popular press the number grew to as many as 400 words. A problem with trying to pin down exactly how many Inuit words there are for snow and/or ice, or for anything else, is that the various dialects of Inuit are polysynthetic, which means that words can effectively be made up on the spot by concatenating various particles to the root word. For example, the suffix -tluk, for "bad," might be added to kaniktshaq, for "snow," to give kaniktshartluk, "bad snow." This can give rise to any number of snow terms, from akelrorak ("newly drifting snow") to mitailak ("soft snow over an opening in an ice floe").