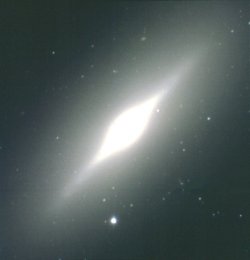 NGC 3115 was the fourth galaxy in which a supermassive black hole was found (Kormendy & Richstone 1992, ApJ, 393, 559). It is well suited to the black hole search: at a distance of only 32 million light-years (9.7 Mpc), it is close enough that the effects of a black hole on nearby stars are easily seen, and it is transparent (no dust) and made of old stars so that the measurements are straighforward. Also, it contains an edge-on nuclear disk of stars. This is important because it means that the dynamics are dominated by rotation. As a result, the central mass can be measured with fewer uncertainties than normal. In fact, the black hole in NGC 3115 was one of the easiest to find, because it is unusually massive compared to the rest of the galaxy. Rapid rotation and large random velocities of the stars near the center imply that NGC 3115 contains a black hole about 1 billion times as massive as our Sun.