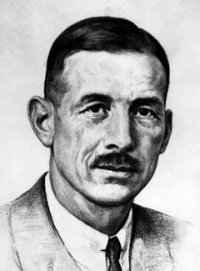 Robert Trumpler was a Swiss-born American astronomer who studied and classified star clusters. He also took part in observational tests of the general theory of relativity in 1922.

Trumpler was born in Zürich and studied there and in Germany at Göttingen. In 1915 he moved to the United States; he was professor of astronomy at the University of California from 1930. At the Allegheny Observatory in Pennsylvania, Trumpler noted that galactic star clusters contain an irregular distribution of different classes of stars, and these observations paved the way for later theories about stellar evolution. In 1930 he showed that interstellar material was responsible for obscuring some light from galaxies, which had led to overestimations of their distances from Earth. Working at the Lick Observatory, near Chicago, he studied the planet Mars, concluding that some of the supposed 'canals' observed by Italian astronomer Giovanni Schiaparelli could be volcanic faults. Trumpler's hypothesis, made in 1924, did not gain real support until the return of the photographs taken by Mariner 9 probe, more than 50 years later.

Trumpler classification is a classification scheme for open clusters devised by the American astronomer Robert Trumpler. It uses three criteria: degree of central concentration (from I, most concentrated, to IV, least); range of brightness of member stars (from 1, narrow range, to 3, wide range); and total number of stars in the cluster (p for poor, less than 50; m for moderately rich, 50 to 100; r for rich, more than 100). The addition of "n" indicates that the cluster has some nebulosity; for example, the Trumpler classification of the Pleiades is I3rn.