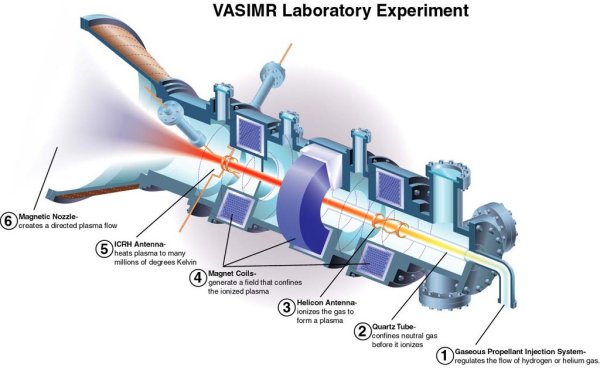 VASIMR (Variable Specific Impulse Magnetoplasma Rocket) is a type of helicon thruster that has been under development by a NASA astronaut for more than two decades. Astronaut Franklin Chang-Diaz, a veteran of seven Space Shuttle flights, began work on the rocket technology in 1979, when he was a graduate student at the Massachusetts Institute of Technology. Since late 1993 Chang-Diaz and colleagues have continued to work on the engine, first at the Advanced Space Propulsion Laboratory at the Johnson Space Center and more recently with Houston-based Ad Astra Rocket Company.

Unlike conventional rocket engines, which ignite a mix of fuel and oxidizer to generate thrust, VASIMR uses a series of magnetic fields to create and accelerate plasma, or high-temperature ionized gas. The process begins when neutral hydrogen gas is injected into the first of three magnetic cells. That cell ionizes the gas, stripping away the sole electron from each hydrogen atom. The gas them moved into the central magnetic cell, where radio waves generated in a manner similar to a microwave oven heats the gas to temperatures more than 50,000°C, turning it into a plasma. The plasma is then injected into the last magnetic cell, a magnetic nozzle, which directs the plasma into an exhaust that provides thrust for the engine.


A key advantage of the engine is that its specific impulse can be varied in flight to change the amount of thrust. The specific impulse of the engine can be turned down to provide additional thrust during key portions of a mission, then turned up during cruise phases to improve efficiency. If VASIMR is successfully developed, it could cut in half the time needed for travel to Mars. By firing continuously, accelerating during the first half of the flight then turning to decelerate the spacecraft for the second half, VASIMR could send a human spacecraft to Mars in just over three months. In addition, VASIMR could permit such a mission to abort to Earth if problems developed during the early phases of the mission, a capability not available to conventional engines.

In the shorter term, VASIMR technology could be used for re-boosting large orbiting platforms, satellite delivery and repositioning, and cargo delivery to the Moon. It may also have applications on Earth in the microelectronics and environmental industries. High power plasma devices are being studied to process large amounts of radioactive nuclear waste and to destroy highly toxic chemical and biological waste. Development of superconducting magnets for VASIMR also could lead to applications in space radiation shielding, transportation, medicine and energy generation. The first objective is to move a small spacecraft in low orbit using VASIMR by 2010.

The use of hydrogen as the fuel for the VASIMR project has many side benefits. Because hydrogen is available anywhere in the solar system, a VASIMR-powered spacecraft could be launched with only enough fuel to get to its destination, such as Mars, and then pick up more hydrogen upon arrival to serve as fuel for the return trip home. Another benefit is that hydrogen is the best known radiation shield, so the fuel for the VASIMR engine could also be used to protect the crew from harmful effects of radiation exposure during the flight.