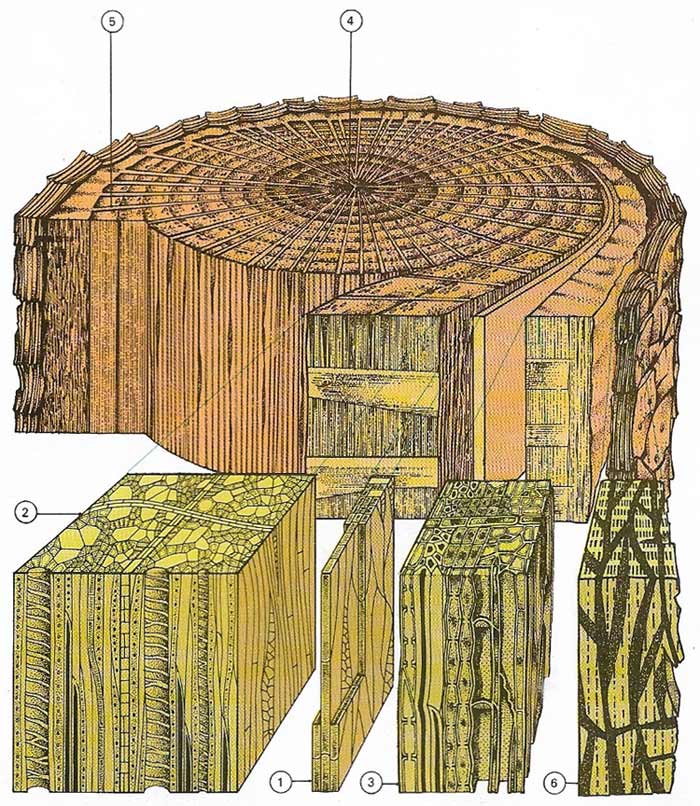 Fig 1. Trees increase in girth by rings of new wood produced annually in temperate zones but less often in the tropics. The cambium (1) produces xylem (2) and phloem (3). They are alive by the heartwood (4) is dead. The medullary rays(5) allow the transport of food across the trunk. Bark (6) is a protective outer coating.

Fig 2. Roots anchor a tree securely to the ground and take up from the soil the essential minerals and the huge quantity of water it needs – several hundred liters a day is not unusual. A fibrous root system such as that of an oak (Quercus sp) has roots that spread outward, branching repeatedly until the soil is threaded with a mat of root fibers that often extends far beyond the reach of the crown of the tree, The red mangrove (Rhizophora mangle) rises above its swampy habitat on stilt roots which enable it to survive changes in the mud level. The white mangrove (Avicennia offinalis) sends roots upward in the airless mud to enable them to obtain oxygen. Root systems develop in different ways. The shallow roots of tall rainforest trees concentrate in the humus-rich topsoil and grow flange-like buttresses that support the trunk. These can grow to 4 m (13 ft) up and out. The common alder (Alnus glutinosa) is another resident of waterlogged places that has supporting roots.

Fig 3. Plant hormone (auxin) (1) is produced by the leaf. As the leaf ages the auxin production slows and an abscission layer (2) forms. The leaf falls off leaving stalk (3) and stalk vein scars (4). 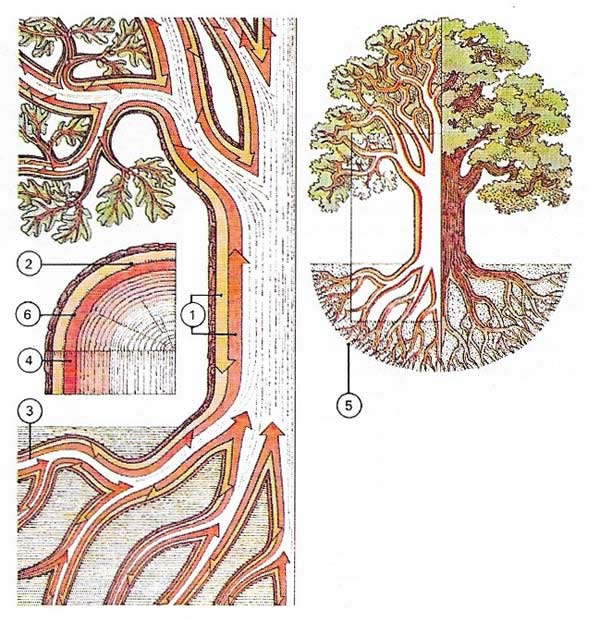 Fig 4. Sap circulates in a tree (1). Food made in the leaves is carried in the phloem (2). Water and dissolved minerals (3) for food production are taken from the roots in the sapwood or xylem (4). Shoots, root tips (5), and cambium (6) are the growing points. 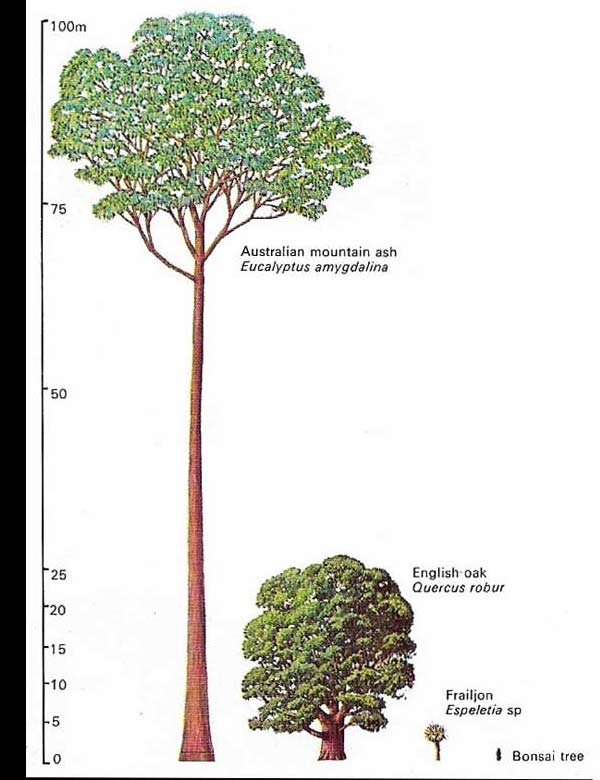 Fig 5. Trees grow taller than any other living thing but can still survive in miniature form. If the roots are restricted either artificially, as in bonsai perfected in Japan, or by natural means as when a seed germinates in a very thin soil on a mountain, a fully formed tree only a few centimeters high will result. The California redwood, The tallest tree, is closely rivalled by a eucalyptus such as the mountain ash of Australia. The eucalyptus can grow as much as 14 m (45 ft) in two years. All parts of this tree are rich in oil. It is also grown for its hard timber. The English oak is one of 450 species of oak that grow as trees, bushes, and shrubs. It enlarges slowly – about 4.5 m (15 ft) in 10 years – but produces wood of prodigious strength. Espeletia grows on snowy ledges over 400 m (1,300 ft) up in the Sierra Nevada. 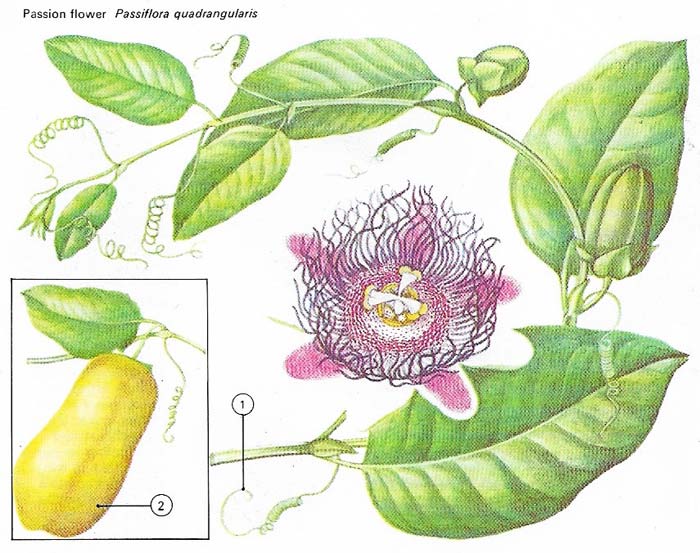 Fig 6. The passion flower is a climbing woody plant. It makes its way by means of twining tendrils (1)> Some species produce large, edible fruits (2).

The world's flowering trees, although they appear to be quite different from the rest of Earth's flora, do not in fact form a distinct botanical category. Most of them are simply flowering plants (angiosperms), that possess woody stems. All living trees, with the exception of the gymnosperms such as the conifers and gingko, are flowering trees. These are divided botanically, on the basis of the number of seed leaves or cotyledons they posses, into the monocotyledons, which have one seed leaf, and the dicotyledons, which have two seed leaves.

Relatively few monocotyledons are flowering trees and those that are, unlike dicotyledonous trees, produce no wood. The most familiar are the several hundred palm species, such as the date (Phoenix dactylifera) and the coconut (Cocos nucifera). Most tree species are dicotyledonous and the majority grow in the world's tropical forests. Many valuable wood trees make up this group including teak, ebony, and mahogany. In contrast, the temperate regions support few tree species. Oak, ash, beech, and birch are the four most common temperate trees. They grow in mixed woodlands, often accompanied by other species such as the Spanish chestnut, or (less usually) form single-species forests, as in the case of the black beech of New Zealand.


Size and growth of trees

The key to the size of trees lies in a continuous ring of cells within the trunk known as the cambium (Fig 1). The multiplication of these cells, which lie just below the bark, results in growth. The cells produced by the cambium rapidly become specialized as elements of the transport system within the trunk, by which water, food substances, and essential mineral salts are carried through the tree's trunk, branches, and leaves.

The tree's structural and mechanical strength – endowed by its woodiness – is a consequence of the fate of the cells produced by the cambium. As the cells of the water-transporting system, known collectively as the xylem, enlarge and age they gradually become invested with layers of lignin, a tough substance related chemically to cellulose. Lignin endows a rigidity that helps tree to stand erect – the root system also aids in this.

Division of the cambial cells does not proceed at a steady pace. In temperate trees growth is much faster in summer than in winter. As a result, the woody cells that arise in the summer months appear as lighter-colored rings when the tree trunk is cut across. Because this is a yearly cycle of growth the tree's age is easily determined by counting the number of these annual rings. In tropical trees growth patterns follow the cycle of wet and dry seasons.

The bark that covers the tree is a product of a special tissue, the cork cambium. This protective covering for the all-important cambium varies greatly in thickness and consistency from species to species. The bark of the silver birch, for example, is thin and papery, while that of the cork oak is extremely thick and porous. In some savanna trees the bark is even fire-resistant.

Trees, like all other green plants, produce the food they require by photosynthesis. This is a process in which energy from the Sun is trapped by the green pigment chlorophyll in the leaves and used to build food materials from the simple chemicals water and carbon dioxide. The leaves of trees show a profusion of shape and size and may be simple or complex. Near the extremes of the scale are the small, simple leaves of the birch measuring up to 5 cm (2 in) in length and the giant leaves of the rubber plant, which can be more than 30 cm (12 in) long.

Each leaf on a tree has a limited life, which depends on climatic factors. In many temperate trees all the leaves are shed every autumn and reappear in spring (Fig 3). These trees are described as deciduous. In contrast, evergreens are those in which the leaves die and are replaced at random every two or three years. Large numbers of tropical trees are evergreen but those that endure a dry season are often deciduous.

In temperate regions the flowers of trees are generally unspectacular, often to such a degree that they appear to the casual observer to the non-existent. The reason for this lack of floral flamboyance is that these trees are wind pollinated and do not need to attracted living pollinators such as insects. Those woody plants that are pollinated by insects – most shrubs, climbers, and tropical trees – produce large, colorful, often scented flowers (Fig 6).

The results of successful pollination – the fruits of trees – are as varied as the flowers. The winged fruits of the sycamore and the ash, the huge nuts of tropical trees such as the coconut,the fleshy fruits of apples and plums and the pea-like pods of the acacia and laburnum are some familiar examples.


The future of flowering trees

The distribution of flowering trees over the Earth has varied greatly since these plants made their first appearance. Analysis of pollen remains shows that the preglacial European woodlands contained not only the familiar modern trees but also those regarded as alien species, for example magnolias and rhododendrons. Were it not for their removal by man, forest would still cover huge areas of the globe. Only in recent decades have efforts been made to conserve the tree of the world's temperate regions.