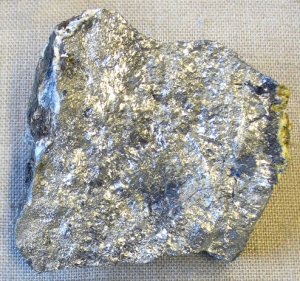 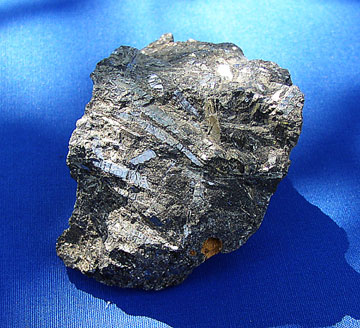 Antimony (Sb) is a brittle, toxic, semimetallic element (see metalloid), which expands on solidifying; it lies in group VA of the periodic table (Fig 1). It occurs as the element, oxide, and, most commonly, sulfide (stibnite, Sb2S3); from stibnite it is extracted roasting the ore to give antimony (II) oxide and then reducing this with carbon.

Antimony is used in type metal and other alloys, particularly in hardening lead for batteries, and in semiconductors. It has two allotropes: a silvery white metallic form and an amorphous gray form. Its most common isotope is 121Sb (57.25%).

Although rather unreactive, antimony forms trivalent and pentavalent oxides, halides, and oxyanions. Certain antimony compounds are used in the manufacture of medicines, paints, matches, explosives, and fireproofing materials.

Stibnite is a soft, gray mineral, antimony (II) sulfide (Sb2S3), the chief ore of antimony. It is found in low-temperature veins and rock impregnations, and occurs as orthorhombic system aggregates of either prismatic crystals or granular masses (Fig 2). It is opaque, sometimes iridescent, and gray or black in color. Much of the world's supply comes from China. Stibnite is used in the manufacture of fireworks and matches. Hardness 2, relative density 4.6.