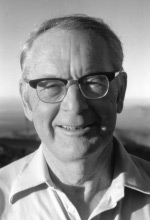 Harold and Horace Babcock were American astrophysicists, father and son, who did pioneering research on the magnetic fields of the Sun and other stars.

Harold Babcock was one of the first staff members of the Mount Wilson Observatory, remaining there from 1909 until 1948. Harold carried out solar research alongside George Hale and made precise laboratory measurements of atomic spectra that helped others identify the first forbidden lines in the laboratory. With C. E. St. John he obtained precise wavelengths for some 22,000 lines in the solar spectrum and extended measurements into the ultraviolet and infrared.

His son Horace worked at Lick Observatory (1938–1939), then at the Yerkes and McDonald observatories (1939–1941), before joining Harold at Mount Wilson after World War II. The two collaborated, developing the solar magnetograph in 1948 and using it to measure the distribution of magnetic fields over the solar surface. Previously, only the powerful fields in the vicinity of sunspots had been known. By the late 1940s the Babcocks were able to report the presence of weak general magnetic fields on the Sun, restricted to latitudes greater than 55°, and the discovery of a magnetic field associated with another star – 78 Virginis. By 1958 they had established the presence of magnetic fields in some 89 stars. Horace served from 1964 until his retirement in 1978 as director of the Mount Wilson and Palomar Observatories (known, from 1969 on, as the Hale Observatories).