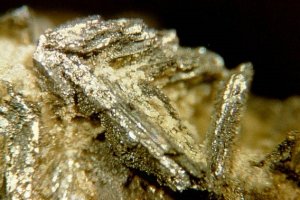 Bismuth (Bi) is a silvery white, brittle, metallic element of group VA of the periodic table. Bismuth was first identified as a separate element in 1753. Its chief ores are bismite (Bi2O3) and bismuthinite (Bi2S3) from which it is extracted by roasting and reduction with coal; it is also obtained as a by-product of the refining of copper and lead ores, and occurs in native form.

Bismuth is rather unreactive; it forms trivalent and some pentavalent compounds. Physically and chemically it is similar to lead and antimony. Its most common isotope is 209Bi.

Bismuth a rather poor conductor of heat and electricity that expands on solidifying. It is put in alloys of low melting point which are used in automatic sprinkler systems. Since bismuth expands on solidification, it is used in alloys for casting dies and type metal. It is also used in insoluble compounds to treat gastric ulcers and skin injuries. Bismuth (III) oxide is used in glass and ceramics.