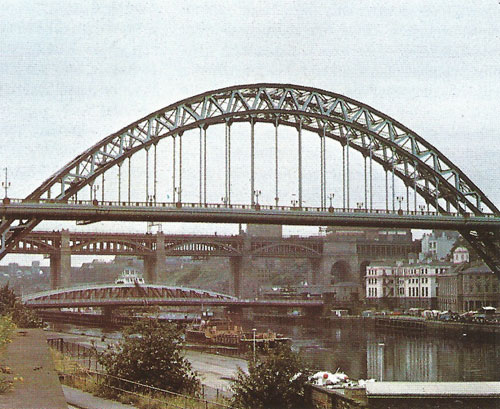 These three bridges spanning the River Tyne in Newcastle, England, are curves at work. The arches are close to parabolas of different forms. The parabola is ideal for an arch whose weight is negligible compared to the even weight of the roadway. For an actual bridge the arch's own weight must be allowed for.

A curve is a continuous mapping from a one-dimensional space to an n-dimensional space, i.e., the map of an infinite set of points (x1, x2, ...) into a space S such that each point satisfies a function f (x). In plane geometry, should f (x) be a polynomial, the curve is described as an algebraic curve; others are termed transcendental curves.

An algebraic curve is a curve the equation of which involves only algebraic functions. These are functions that, in their most general form, can be written as a sum of polynomials in x multiplied by powers of y, equal to zero. Among the most familiar examples are straight lines and conic sections. Other examples include Neile's parabola, the lemniscate. conchoids, and cissoids.

Although most curves are of infinite extent in at least one direction, it is generally useful to consider only that section of it lying between two points, f(p) and f (q): a curve on which for every f (p) an f (q) can be chosen which coincides with f (p), where p is not equal to q, is a closed curve and may be finitely bounded in all directions (though possibly of infinite extent); curves which do not satisfy these conditions are said to be open.

A crunode is a point where a curve intersects itself so that two branches of the curve have distinct tangent lines.