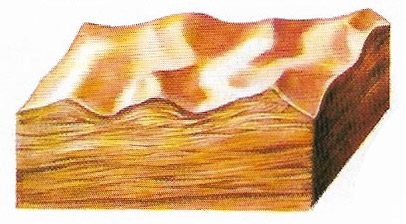 Fig 1. Ripple marks are typical structures of sands deposited in shallow waters, revealing that the sands were built up almost to sea-level. 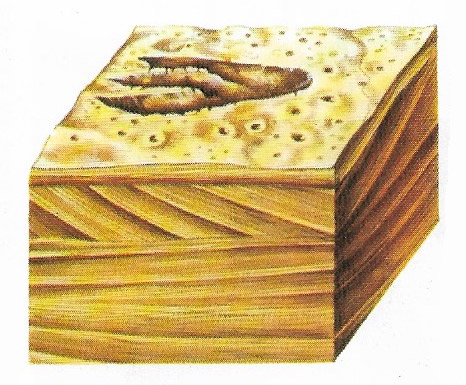 2. An example of a rain pit: a bed of fine mudstone shows reptile footprints and marks caused by falling rain. Structures such as these provide valuable clues about the climate of the area at the time of the formation of the rocks and give some information about the fauna.

The term "facies" encompasses all the features of a particular rock or stratum of rock that indicates the conditions in which those rocks were formed. Such features include the mineral content, the shapes and sizes of the particles, the sedimentary structures, the fossils, the relationship to the beds above and below, the color and even the smell – everything that can be described about the rock. Facies are of great interest in the study of stratigraphy.

The mineral content can show whether a sedimentary rock was precipitated out of salts dissolved in seawater or built up from material washed off already existing terrains, and can show the nature of these original terrains. The presence of grains of garnet, for example, shows that the original rocks were metamorphic whereas olivine crystals indicate the existence of original rocks that were igneous. The shapes of the constituent particles indicate how far the material has been transported from the source – angular fragments have not traveled far but rounded grains have been carried long distances and have had their corners and edges broken off by the violence of their journey. If a rock consists of particles that are more or less the same size then it can be deduced that the particles have been moved about (or sorted) by currents before coming to rest. A mixture of particle sizes denotes a rapid transportation and dumping of material.

Sedimentary structures give a direct indication of the conditions under which the sediment was accumulated. Ripple marks (Fig 1) are formed under shallow water conditions, rain pits (Fig 2) and mud cracks show the drying out of shallow pools, small-scale cross-bedding shows the presence of currents and the direction of the currents can be determined by the attitude of the bedding.